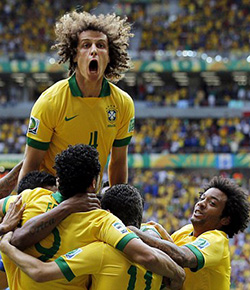 THE on-going 2014 FIFA World Cup soccer extravaganza in Brazil has had one headache for many soccer crazy Zimbabweans.
Some of its mouth-watering ties are being staged during the country’s wee hours when city life would virtually be dead.
But intent on restoring the excitement usually experienced in sports bars and other night joints during popular soccer matches, enterprising bar owners have pulled different tricks from their bags.
One of them is indeed the Rainbow Towers Hotel and Conference Centre which has launched the Rainbow 2014 World Cup Soccer Fan City. The Harare International Conference Centre has been converted into an indoor soccer stadium.
With a 4,500 seating capacity, HD 8m by 12m theatre screens, high quality surround sound system, secure parking, food, drinks and no power cuts, the fan city provides soccer lovers an opportunity to watch football amid 5000 more cheering fans.
Rainbow Towers Hotel and Conference Centre brings you the excitement and euphoria being experienced in Brazil closer home.

Several packages have been launched which range from the US$999 VIP suite day use packages that allow one to watch football in one of the hotel’s luxurious suites.
This package accommodates up to 10 people and it includes snack platters, imported whiskies and beers and day use of the room.
Corporates wanting to entertain their clients to a World Cup match are best suited for this package.
Because some of the games will be played during the night, the hotel has come up with an affordable $89 bed and breakfast per person sharing package that include access to the Rainbow Fan City theatre, food and drinks whilst watching the game.
Other packages range from US$30, US$15 to US$5.
The US$30 package is a VIP offer in the Rainbow Fan City auditorium and it includes snack platters and drinks. The drinks range from imported beers and wines to local selections.
The US$15 dollar package includes entrance plus food and a six-pack. The US$5 package is for the no frills attached soccer lovers, who would want to watch soccer in numbers and do not necessarily want food and beverages.Advertisement

There will be live entertainment in between matches courtesy of Power FM DJ’s and lots of instant prizes to be won.
Tickets can be bought from the Rainbow Tourism Group Central reservations office at the Rainbow Towers Hotel and Conference Centre or one can buy their ticket on the actual day at the HICC main entrance.
Social network sites have been awash with fans looking forward to the matches and hoping that they will provide good entertainment.