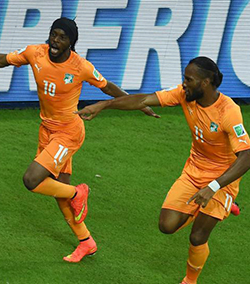 GERVINHO headed the winner as Ivory Coast scored a quick-fire double to come from behind and beat Japan 2-1 in their Group C clash in Recife.
The former Arsenal forward nodded in Serge Aurier’s delicious right-wing cross on 66 minutes, just seconds after the right-back had set-up Swansea’s Wilfried Bony to head home.
Japan had taken the lead when Keisuke Honda thundered home an unstoppable left-foot shot from just inside the area after the Elephants had gone to sleep at a 16th minute corner.
The Africans dominated the first-half possession but were left lamenting some poor finishing as Bony, preferred to Didier Drogba, miscued when well placed, while Salomon Kalou contrived to plant a free header well off target.
Ivory Coast finally turned the game on its head midway through the second period with two in two minutes and could have added to their tally late on as Drogba twice went agonisingly close.Advertisement