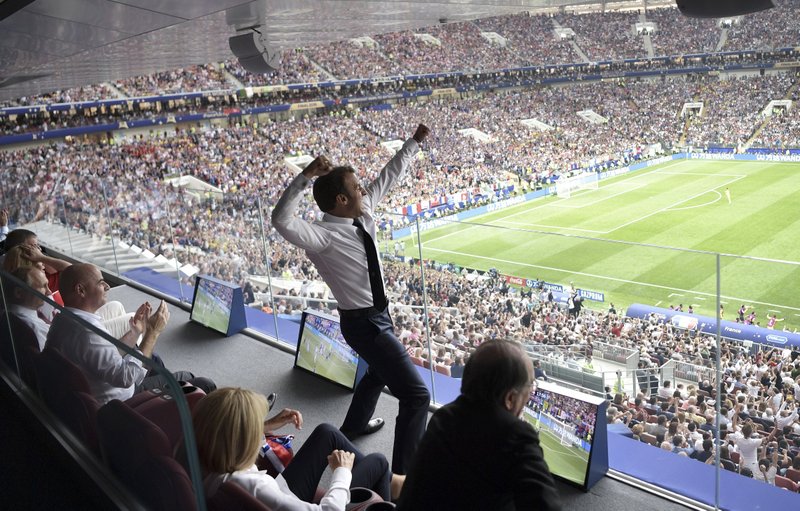 Emmanuel Macron Cheers From The Stands
Spread This News

President Emmanuel Macron was pictured cheering from the stadium, got drenched in the rain on the pitch, then attempted to “dab” with the players in the changing room Sunday after France’s victory in the World Cup.

The football-loving 40-year-old leapt to his feet to celebrate France’s goals as he attended the game in Moscow alongside Russian President Vladimir Putin and his Croatian counterpart Kolinda Grabar-Kitarovic.

After the final whistle, Macron found himself on the pitch at the Luzhniki Stadium without an umbrella during a fierce downpour that started during the trophy presentation — unlike Putin who was sheltered by an aide.

“MERCI” he wrote in a one-word tweet after the match, which gave France its second World Cup victory and sparked euphoric street parties across the country.

Widely shared footage posted on Twitter later showed him with French defender Benjamin Mendy and star midfielder Paul Pogba in the changing room attempting to “dab” — a craze thought to have been started by Atlanta rappers.

Macron, who used to play left-back in university football teams, had met the squad before they left for the competition, urging them to return home with the famous golden World Cup trophy.

He will welcome them at the presidential palace in Paris on Monday when the victorious players return home and the former investment banker will be hoping some of the feelgood factor rubs off on him.

Former President Jacques Chirac benefitted from a leap in his ratings in 1998 when France won its first World Cup despite not knowing many of the player’s names.

Macron, who has pushed through a series of pro-business reforms since his election in May last year, has seen his ratings slide again recently following criticism that he is out-of-touch and elitist.

A recent poll by the Odoxa group found that 75 percent of respondents judged him “not close to the people.”