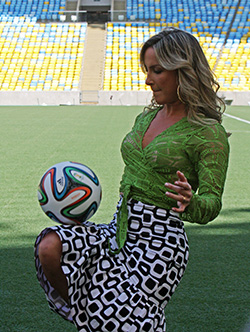 THE official World Cup song is definitely striking a chord — the wrong one with many in host country Brazil.
Since the recent release of FIFA’s “We Are One (Ole Ola),” hordes of fans in Brazil have been slamming the official 2014 Cup theme.
Many expressed their frustration on Twitter under the tag #VoltaWakaWaka — a plea for the return of the widely loved song that Colombian artist Shakira performed for the 2010 tournament in South Africa.
Although Brazilian Claudia Leitte is also featured in the official theme, critics say they don’t understand why Cuban-American rapper Pitbull and Bronx-born Puerto Rican singer Jennifer Lopez were chosen for the song when there are so many other great musicians in the land of Bossa Nova.
They also complain that the song is mostly in English and Spanish, leaving only a few seconds at the end for Leitte to sing in her native Portuguese.
“What I don’t like about the music is that it’s a poor, dull, generic pop theme,” said Gaia Passarelli, a Brazilian music journalist and a former VJ for MTV Brazil. “It’s a shame considering Brazil’s rich musical tradition, which is admired all over the world.”
“In the end, we lost a chance to do something rich, inspiring and cool. I’m feeling ‘saudades’ for Shakira,” Passarelli said, using a Portuguese word that roughly translates as painful longing.
Shakira does have a song on FIFA’s official World Cup album, the driving “Dare (La La La).”