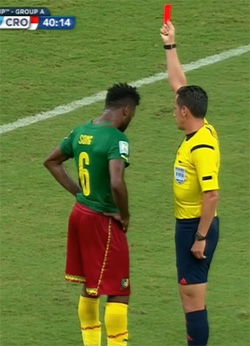 CAMEROON failed to progress beyond the World Cup group stage once again as they slumped to defeat against Croatia.
The African side fell behind in the 11th minute as Ivica Olic fired home, and were reduced to 10 men after Alex Song lashed out at Mario Mandzukic.
Ivan Perisic made it 2-0 when he punished goalkeeper Charles Itanje’s poor clearance, before Mandzukic headed home Croatia’s third.
Mandzukic added his second, tapping in after Eduardo’s shot was parried.
Niko Kovac’s side now face Mexico in their final Group A game knowing victory would assure them of a place in the last 16 for the first time in four attempts.
But Cameroon have failed to reach the second round for their fifth successive World Cup.
They looked rudderless without injured captain Samuel Eto’o, and their task became more difficult when Song lost his cool five minutes before the break.
The Barcelona midfielder inexplicably lashed out at Mandzukic’s back as he tracked the Croatia striker, and referee Pedro Proenca had no hesitation in showing him a red card.
Cameroon were already a goal down, with Olic having tapped in after a lovely pass from the impressive Perisic.

Wolfsburg midfielder Perisic, who has been linked with Everton, then went close with a header before he doubled Croatia’s advantage with an excellent run and finish after Itanje found him with a poor kick.
Mandzukic, who was suspended for Croatia’s opening game, then showed his aerial prowess by netting a powerful header following Danijel Pranjic’s corner.
And the Bayern Munich striker completed the rout with an easy tap-in after the nervy Itanje could only push substitute Eduardo’s tame shot into his path.
Cameroon’s best attempt came in the dying seconds, when substitute Pierre Webo’s overhead kick forced Stipe Pletikosa to save brilliantly.
And there was still time for the four-time African champions’ full-back Benoit Assou-Ekotto to thrust his head at team-mate Benjamin Moukandjo during an argument in stoppage time.
Cameroon still have to face hosts Brazil, and will have to improve markedly in both performance and discipline if they are to avoid another embarrassment.Advertisement