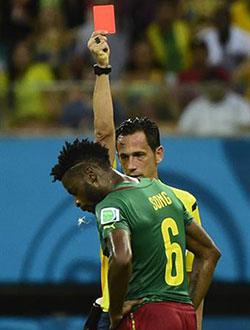 WITH the group stage of the 2014 World Cup done and dusted, we pick out the worst XI thus far. Do you agree with our ‘worst team of the group stage’? Have your say in the comments section below.
GOAL KEEPER: Igor Akinfeev
Russia goalkeeper Igor Akinfeev undoubtedly had one of the poorest tournaments of any player at the World Cup. The CSKA Moscow stopper’s howler in Russia’s opening fixture against South Korea almost cost them the match, and another error in their 1-1 draw with Algeria meant that they crashed out of the tournament at the group stage having failed to register a win it what was a favourable draw.
RIGHT BACK: Sergio Ramos
Sergio Ramos is, on his day, one of the finest defenders in world football, but the Real Madrid man will want to banish the memory of this World Cup as reigning champions Spain fell at the first hurdle. The defender was very poor in their opening fixture, of which they were hammered 5-1 by the Netherlands, and again looked off the pace in Spain’s 2-0 loss to Chile, which confirmed their exit after just two games.
CENTRE BACK: Pepe
It may come as no surprise to see Ramos’ Real Madrid teammate and partner in crime Pepe in this list. The two have caused quite a stir on a number of occasions in club football, with a tendency to see red one of the more disappointing aspects of their game. And it was no different for Portugal’s Pepe at this World Cup. The defender was sent off in the first half of the opening game for foolishly clashing with Thomas Mueller. Pepe was reinstated to Portugal’s starting XI for their final match with Ghana, and although Paulo Bento’s side finally managed a win, it was too little, too late as they were eliminated.
CENTRE BACK: John Boye
Ghana’s John Boye had the opportunity to really put himself in the shop window at this World Cup, but the Stade Rennais defender covered himself in very little glory and leaves the tournament with his tail between his legs. Having struggled at the heart of Ghana’s defence in each of their three games, Boye also left Clint Dempsey and Thomas Mueller in a bloodied mess following a couple of sloppy challenges. And to top it all off, Boye turned the ball into his own net in their 2-1 defeat to Portugal.Advertisement

LEFT BACK: Leighton Baines
Much was made of Ashley Cole’s exclusion from Roy Hodgson’s England side, but it was chance for Everton’s Leighton Baines to stake a claim as the number one left back for years to come, particularly with youngster Luke Shaw breathing down his neck. Unfortunately for Baines, who is considered as one of the Premier League’s best defenders, the Everton man failed to live up to the hype. Although he was exposed by Hodgson’s tactics in England’s opening game with Italy, Baines was often caught out of position and played a part in Italy’s opening goal. A host of changes in England’s bore draw with Costa Rica meant that Baines was dropped and replaced by Shaw, who is certainly the future in that left-back position.
MIDFIELDER: Alex Song
Cameroon have surprised many in World Cups gone by, but the team went out with a whimper this time, but not without causing much controversy. The Indomitable Lions scored just one goal whilst conceding nine and lost all three of their fixtures. And it was in their match with Croatia that Volker Finke’s side melted down – Song in particular. The Barcelona midfielder lost his temper with opponent Mario Mandzukic and violently elbowed the Croatian in the back before being sent off.
MIDFIELDER: Wilson Palacios
Stoke’s Wilson Palacios, who has spent the last six years playing in English football’s top flight, was tipped to be one of Honduras’ stars during this World Cup, but it wasn’t to be for Palacios, whose tournament started in the worst possible way. The 29-year-old was sent off in the opening half of his side’s 3-0 loss to France for sending Paul Pogba crashing to the floor inside the penalty area. Palacios returned for Honduras’ final match, but was off the pace and was a bystander as the South Americans were again beaten 3-0.
MIDFIELDER: Steven Gerrard

Steven Gerrard captained England for the first time at the World Cup, but would have hoped for a better outcome. England were eliminated after just two games following defeats by Italy and Uruguay. Liverpool’s talismanic midfielder was unable to replicate anything like the form he had displayed for his club side last season as he struggled to make an impact on England’s World Cup. A pedestrian in the Three Lions’ opening game loss to Italy, Gerrard played a huge part in both of Uruguay’s goals – England crashing out in embarrassing fashion.
MIDFIELDER: Andres Iniesta
Andres Iniesta has been the focal point to all that Barcelona and Spain have achieved in the last six years. The midfield maestro is one of the best passers in the game, and his ability to help his side retain the ball is second to none, but it could well be one tournament too far for the 30-year-old. Iniesta looked out of his depth as the Netherlands ran Spain’s midfield ragged in the opening fixture, and he, too, struggled to control the pace of the game in their loss to Chile.
STRIKER: Cristiano Ronaldo

It’s not very often that you see Cristiano Ronaldo in a ‘worst XI’ list, but the Portuguese star and Ballon d’Or winner endured one of the most disappointing international tournaments of his career and leaves at the group stage. It was said by many that Ronaldo was hampered by his teammates, and though he netted Portugal’s winner in their clash over Ghana and also grabbed an assist in the draw with USA, he will be hugely disappointed with his showing.
STRIKER: Diego Costa
Opting to play for Spain over Brazil was always going to make Diego Costa enemy number one at the World Cup, so the Atletico Madrid forward would have wanted to silence his critics with an impressive tournament in the land of his birth. That wasn’t the case, however, as Costa failed to find the net in a tremendously disappointing tournament for reigning champions Spain.