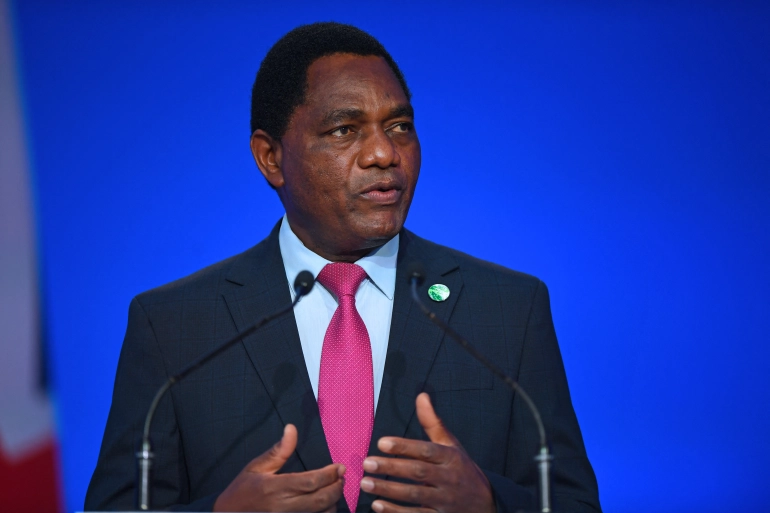 When he first came into office, almost a year ago, Zambia’s new president was ridiculed by skeptics who called him, “the calculator boy,” for his strong focus on the economy and his background as an accountant.

Looking back now, it’s evident that these were the exact skills that Zambia needed to pull itself back from the economic mess it was in at the time, having become the first African country to default on repayments during the pandemic. Since he became president in August last year, Hakainde Hichilema has steered the economy towards stability.

The Zambian kwacha is the best performing currency in the world against the US dollar, rallying over 18.5% from Jan. 22 to Sept. 1.

While continental peers South Africa, Zimbabwe, Nigeria, Ghana, and Kenya have been unable to control rising inflation and plunging currencies, Hichilema’s government has managed to reduce the inflation rate from 24.4% in August 2021 to 9.7% in June this year.

What could be Zambia’s secret in shining in economic areas where almost all countries in the world are struggling? A raft of both monetary and fiscal measures, according to the Policy Monitoring and Research Centre in Lusaka, the capital. 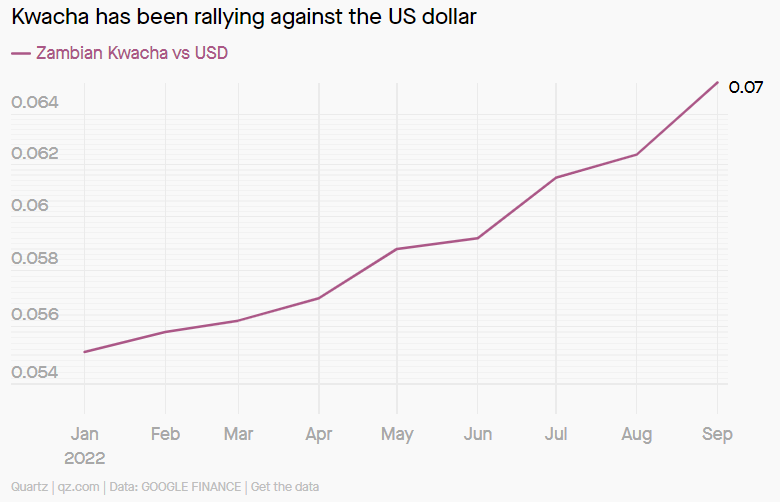 When the government’s monetary policy committee met last November, it decided to “raise the monetary policy rate by 50 basis points to 9%.” The rate remains unchanged till now. The ultimate goal is to reduce inflation to between 6% and 8% by mid 2023 and a decline in inflation had been achieved when it met again in May 2022.

To support agriculture and livestock, the government also removed 5% customs duty on the importation of cattle and chicken breeding. The rate of rise of food prices fell from 12% in July to 11.3% in August.

Challenges still prevail though in the mining sector, which contributes 10% to the country’s GDP.

An agreement with the International Monetary Fund (IMF) to restructure Zambia’s debt, a $1.4 billion bailout package has seen the Kwacha strengthen against the US dollar and helped contain the rate at which prices were rising due to supply-chain disruptions emanating from the war in Ukraine and ravages caused by the covid-19 pandemic. The IMF board approved a $1.3 billion 38-month loan to Zambia on Aug. 31 in addition to another $1.3 billion special drawing rights allocation from the fund it received in August 2021. 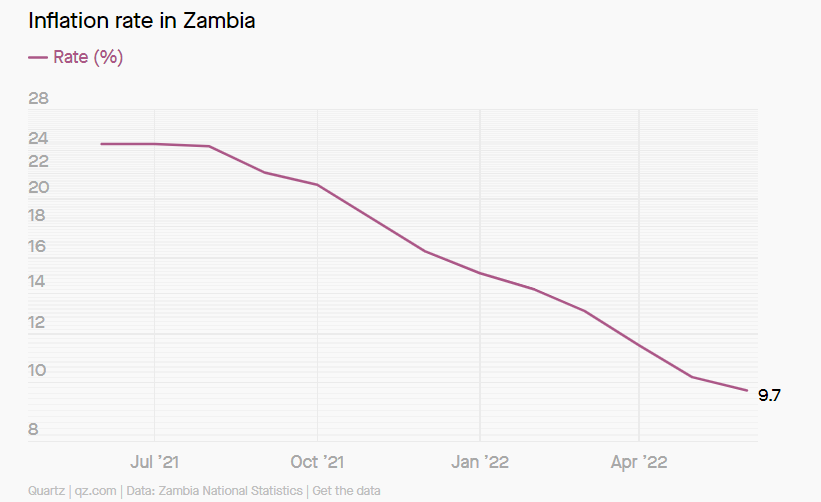 A $1.4 billion bailout package has seen the Kwacha strengthen against the US dollar and helped contain the rate at which prices were rising. Image: Quartz.

Economist Patrick Chileshe says the other reason why the Kwacha has been gaining against the US dollar is increased forex supply. To guard against the volatility in the exchange rate, the central bank was offloading an average of $13 million per day in June.

“We have seen the Kwacha gain strength, and that was driven by increased foreign exchange supply to the market by the Bank of Zambia which was consistent in the market, whereas the demand for US dollars has been low and that led to the appreciation of the Zambian Kwacha,” Chileshe explains.