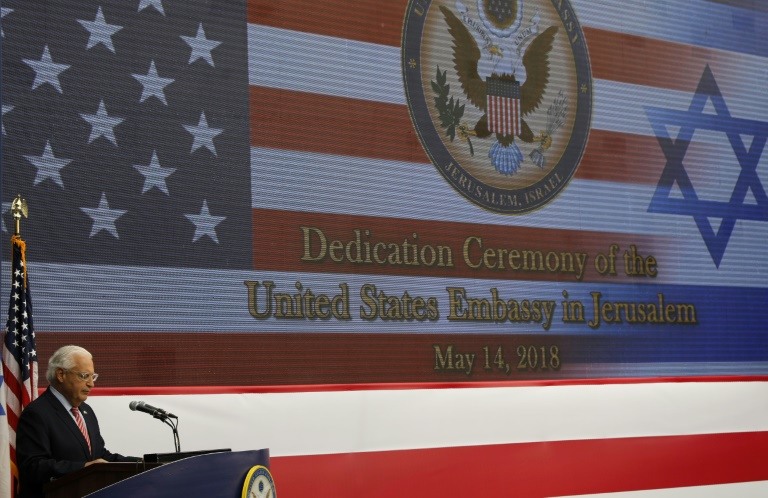 Both friends and foes of the United States voiced criticism Monday as Washington opened its embassy in the disputed city of Jerusalem, saying the move would fan Middle East tensions.

Chief US ally Britain reiterated its stated objection to the move, while the Iranian speaker of parliament said it showed that US President Donald Trump is “feebleminded” and “incapable of evaluating the long-term consequences of his actions”.

“Such actions will increase tensions and insecurity in the world,” Ali Larijani said, adding that they would not go “unanswered”.

The ceremony in Jerusalem, where Trump’s daughter Ivanka and her husband Jared Kushner officiated, came after Israeli troops put down protests over the move by Palestinians at the Gaza border with Israel, killing dozens of civilians.

“We disagree with the US decision to move its embassy to Jerusalem and recognise Jerusalem as the Israeli capital before a final status agreement,” a spokesman for British Prime Minister Theresa May said.

“The British embassy to Israel is based in Tel Aviv and we have no plans to move it.”

Under the 1993 Oslo peace accords shepherded by then US president Bill Clinton, the status of Jerusalem, including whether East Jerusalem will be the capital of a Palestinian state, was to be agreed in future negotiations.

The British statement added that London has “no plans” to move its mission from Tel Aviv to Jerusalem, which is holy to three of the world’s major religions.

France also spoke out against the US move, saying along with many other critics that it violated “unambiguous” international law and UN Security Council resolutions.

Turkish President Recep Tayyip Erdogan, during a visit to London, slammed what he called a “very, very unfortunate” move, saying that it had stripped Washington of its role as mediator in the Middle East peace process.

“With its latest step America has chosen to be a part of the problem, not a solution, and lost its mediator role in the Middle East peace process”, Erdogan told the Chatham House international affairs think tank.

“This decision… will increase tensions and ignite an even greater fire between communities,” Erdogan said.

Russian Foreign Minister Sergei Lavrov reiterated Moscow’s objection to the move, saying: “We firmly believe that it is inappropriate to unilaterally revise the decisions of the international community in this way.”

Lavrov, speaking in Moscow after meeting the Russian defence minister and the pair’s Egyptian counterparts, recalled that Russia “has several times offered a platform” for talks on the status of Jerusalem.

Moroccan King Mohammed VI wrote in a letter to Palestinian leader Mahmoud Abbas that he was “monitoring with concern” the US recognition of Jerusalem as the Israeli capital, the MAP news agency reported.

The monarch, whose country does not have diplomatic ties with Israel, heads the 57-member Organisation of Islamic Cooperation’s Al-Quds Committee, which lobbies on issues related to Jerusalem.

The Egyptian foreign ministry, in a statement expressing “strong denunciation” of Israel’s use of force against Palestinian civilians, said Cairo “totally supports the legitimate rights of the Palestinian people, and first and foremost its right to an independent state with East Jerusalem as its capital.”