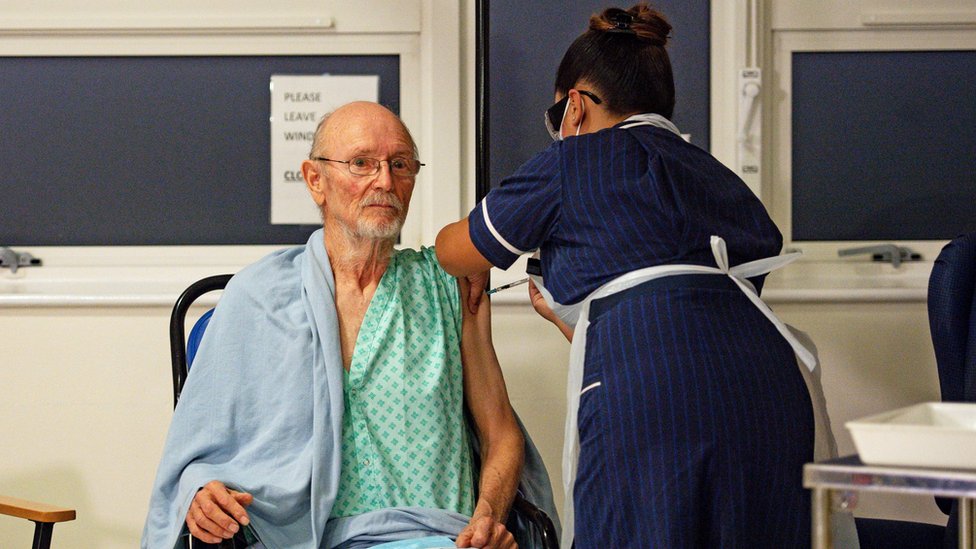 William Shakespeare, the first man in the world to have the Covid-19 jab, has died in hospital.

Tributes were paid to the proud Coventry pensioner, 81, who hit global headlines on December 8 after being vaccinated at the University Hospital Coventry and Warwickshire.

His picture appeared on front pages across the world – much to both his and his family’s delight.

At the time, much was played on the fact that he was called William Shakespeare and was from Warwickshire, but the pensioner was a fiercely proud Coventrian according to his friends.

Bill, as he was fondly known, passed away after a period of illness on Thursday at the same hospital where he famously received his vaccine.

His sad death is being mourned not only by his family but the many people he came into contact with.

He was a “much-loved figure” in the Coventry Labour party according to Jayne Innes, Whoberley ward councillor, and one who will be fondly remembered.

“He was such a lovely man, one who had a real commitment to making his local area better,” said Jayne.

“During lockdown local families will have enjoyed walking amongst the trees planted by Bill and his colleagues in Allesley back in the 1980s.

“He was also very involved with the creation of the Coundon Wood in 2005 and in fundraising for the purchase of Elkin Wood, now managed by the Woodland Trust in 1997.

“Bill was a life-long campaigner, so he was delighted to be able to help encourage everyone to have the vaccine in order to return to all the things we enjoy in life. I’ve had my first. Having our jabs is the best tribute we can all pay Bill.

“He was a keen photographer, loved jazz and socialising, and also loved the natural world and gardens. Bill will be remembered for many things including a taste for mischief.

“He was a much respected figure in the Coventry Labour Party and he will be sorely missed.”

Angela Hopkins, Coventry Labour Party secretary, added: “Bill has been an active member for many, many years, particularly in Bablake ward where he has walked hundreds of thousands of steps every year campaigning for the party and was an Allesley Parish Councillor.

“I know that he will be greatly missed not only by members in Bablake, but by colleagues across the constituency and beyond.”

He used to work at Rolls Royce and was also a school governor at Allesley Primary School, as well as at Coundon Court School.

He leaves behind his wife Joy, two sons, one also called William but known as Will, as well as Julian. He was also a proud grandfather.

Funeral details have yet to be arranged.