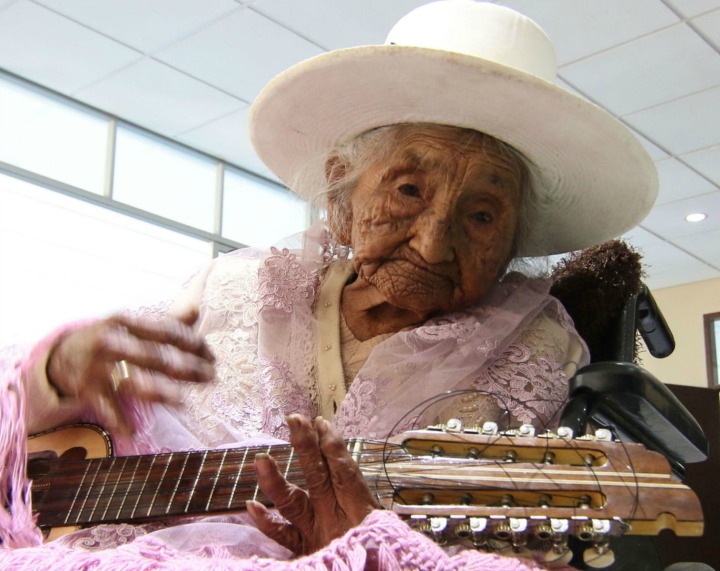 The oldest woman in Bolivia, and perhaps the world, turned 118 on Friday, remaining lucid and in good health, authorities in the South American country said.

Julia Flores was born in 1900 in a Quechua family in the mining region of Potosi in the country’s south.

Known as “Mama Julia”, Flores celebrated her birthday amongst family, friends and local authorities from Sacaba, where she now lives in the centre of Bolivia.

In a country where the average life expectancy is 71, Flores is an exception to the rule.

If her age was officially recognised, she would be the oldest living person and third oldest of all time, but she hasn’t been confirmed by the Guinness Book of Records.

“It’s a day of recognition for us, to celebrate the oldest woman in our country,” Juan Carvajal, a public employee in Sacaba told the Los Tiempos de Cochabamba newspaper.

Dressed in traditional Quechua clothes, complete with white sombrero, Flores played the charango – a type of Andean lute – at her party and tucked into a birthday cake.

She lives in a small mudbrick house with a tight garden where she keeps dogs, cats and chickens that her 65-year-old niece, Augustina Verna looks after.

The Bolivian Andes is no stranger to longevity as the region produced Carmelo Flores – no relation to Mama Julia – from the Aymara people who allegedly lived until 123, which if recognized would have made him the oldest person ever.

The oldest ever person, as recorded by Guinness, was Frenchwoman Jeanne Calment, who was 122 years, 164 days when she died in 1997.