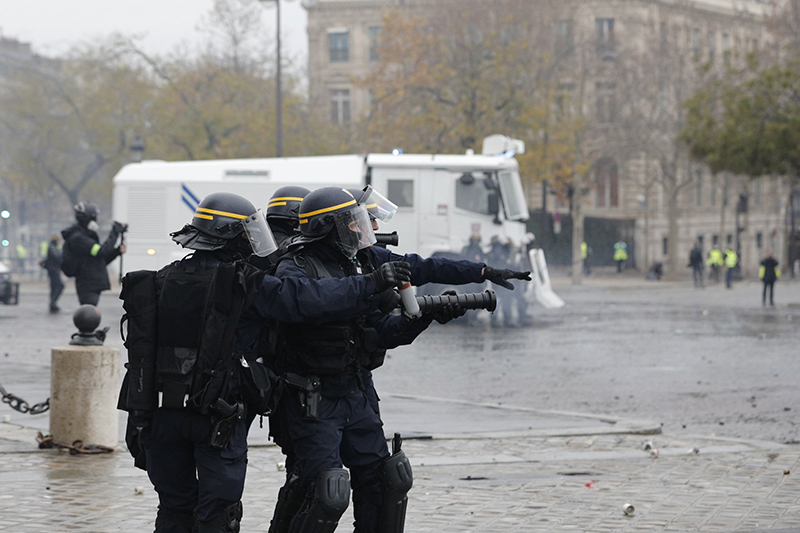 Protesters angry about rising taxes and the high cost of living clashed with French riot police, who closed off some of the city’s most popular tourist areas and fired tear gas and water cannon as they tried to quell the mayhem in the streets. At least 110 people were injured.

French President Emmanuel Macron denounced the violence from the G-20 summit in Argentina, saying those who attacked police and vandalised the Arc de Triomphe will be “held responsible for their acts.” He said he will hold an emergency government meeting Sunday on the protests.

″(Violence) has nothing to do with the peaceful expression of a legitimate anger” and “no cause justifies” attacks on police or pillaging stores and burning buildings, Macron said in Buenos Aires. He refused to answer any questions from journalists about the situation in Paris.

It was the third straight weekend of clashes in Paris involving activists dressed in the fluorescent yellow vests of a new protest movement and the worst urban violence since at least 2005. The scene contrasted sharply with other protests in France, where demonstrations and road blockades elsewhere were largely peaceful Saturday.

The violence is Macron’s biggest challenge so far as president, and even coloured his international image as he had to defend his plans for fuel tax rises — the initial impetus for the protest movement — to other leaders at the G-20 summit. France’s failure to quell the anger has led to copycat yellow jacket movements in Belgium, Germany and the Netherlands.

Thousands of French police were deployed to try to contain the violence, which began Saturday morning near the Arc de Triomphe and continued well after dark. Paris police said at least 110 people, including 20 police officers, were injured in the violent protests and 224 others were arrested.

Interior Minister Christophe Castaner, speaking on French television channel TF1, said one protester was in a life-threatening condition after being part of a group pulling down a metal fence at the Tuileries gardens. A video on social media shows the heavy fence falling on some protesters.

By the afternoon, clashed continued down several streets popular with tourists. Pockets of demonstrators built makeshift barricades in the middle of Paris streets, lit fires, torched cars and trash cans, threw rocks at police and smashed and looted stores.

Some demonstrators removed the barriers protecting the Tomb of the Unknown Soldier from World War I under the Arc de Triomphe monument to pose near its eternal flame and sing the national anthem. An Associated Press reporter at the scene saw other protesters and a soldier intervene to disperse the troublemakers and protect the flame. Police later fired tear gas in the area.

By Saturday afternoon, a large part of central Paris was locked down by police, with all roads leading away from the Arc closed off as more police moved in. Over 20 downtown Paris metro stations were closed for security reasons and police ordered stores in nearby neighbourhoods to close early Saturday evening.

Hours later, some cars still smouldered and law enforcement and protesters were still facing off elsewhere in the capital.

French television showed police leading a shaken woman away from the protesters, and loud bangs rang out near the famed Champs Elysees Avenue where the violence was centred.

Paris Mayor Anne Hidalgo tweeted her “indignation” and “deep sadness” at the destruction and clashes with police, saying that violence is “not acceptable.”

In addition to rising taxes, the demonstrators are furious about Macron’s leadership, saying that his government does not care about the problems of ordinary people. The grassroots protests began with motorists upset over a fuel tax hike, but now involve a broad range of demands related to France’s high cost of living.

The violence in Paris, however, suggests that some protests appear to have been taken over by more radical far-right or far-left groups.

French authorities said they counted 75,000 protesters Saturday across the country, including 5,500 in Paris, numbers that were less than last week’s protest but produced much more destruction.

Earlier Saturday, several hundred peaceful protesters in Paris passed through police checkpoints to reach the Champs-Elysees. They marched on the famed avenue behind a big banner that read “Macron, stop taking us for stupid people.”

Access to the Champs-Elysees was closed to cars and strictly monitored by police with identity checks and bag inspections.

“It’s difficult to reach the end of the month. People work and pay a lot of taxes and we are fed up,” said Rabah Mendez, a protester who came from a southern suburb to march peacefully in Paris.

“Our purchasing power is severely diminishing every day. And then: taxes, taxes and taxes,” said Paris resident Hedwige Lebrun. “The state is asking us to tighten our belts, but they, on the contrary, live totally above all standards with our money.”

Since the yellow jacket movement kicked off on Nov. 17, two people have been killed and hundreds injured in clashes or accidents stemming from the protests.