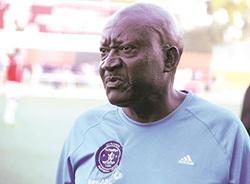 AFTER 270 minutes of no goals, a draw and two losses, Dynamos are walking seriously wounded.
After playing a 0-0 draw against Harare City, the defending champions were thumped 3-0 by leaders Chicken Inn at home before losing 1-0 to Whahwa at Ascot on Thursday.
That is not good news for coach, David Mandigora, and they will certainly not have been hoping for a tougher opponent than FC Platinum this Sunday.
A third loss on the trot would certainly put his job in danger.
But Mandigora believes they can still bounce back.
“If you look at the matches against Chicken Inn and Whahwa, we dominated but lost, so we need to turn those half chances we create into goals.
“Once we concede we struggle to fight back, but this is one thing we have to work on and continue looking for positive results,” he said on Friday.
Mandigora’s Achilles heel has been the dependence on playmaker Ronald Chitiyo but the diminutive midfielder was shunted out in the last two games, leaving the strikers with no clean supply of balls.
Chitiyo has also scored crucial goals for the team but easily gets frustrated when things don’t go his way.
Dynamos will be meeting Platinum for the second time this season. They led 1-0 after 64 minutes in the Independence Trophy final on April 18 only for the match to be stopped due to bad light.
Platinum will welcome back striker Donald Ngoma from a one match suspension after he missed the 3-0 win over How Mine on Wednesday.
Norman Mapeza has continued to cry out for consistency from his players and that has yielded six points from two matches.
He has also changed personnel, benching regular skipper and goalkeeper Petro Mhari for Francis Tizayi while Zambian import Obrey Chirwa has forced his way back into the team.
And Chirwa paid back the coach’s faith with the second goal in Wednesday’s 3-0 win over How Mine.
Add to that, youngsters Wellington Kamudyariwa, Wisdom Mutasa, Walter Musona and Brian Muzondiwa have strength to outrun the tired legs of Augustine Mbara, Ocean Mushure and Stephen Alimenda.
WEEKEND FIXTURES
Saturday: ZPC Kariba v Chicken Inn (Gwanzura Stadium), How Mine v Tsholotsho (Luveve Stadium), Chapungu v Dongo Sawmill (Ascot Stadium)
Sunday: Dynamos v FC Platinum ( Rufaro Stadium), Highlanders v Harare City (Barbourfields Stadium), Hwange v Flame Lily (Colliery Stadium), Triangle United v Whawha (Gibbo Stadium), Buffaloes v Caps United (Sakubva Stadium)Advertisement