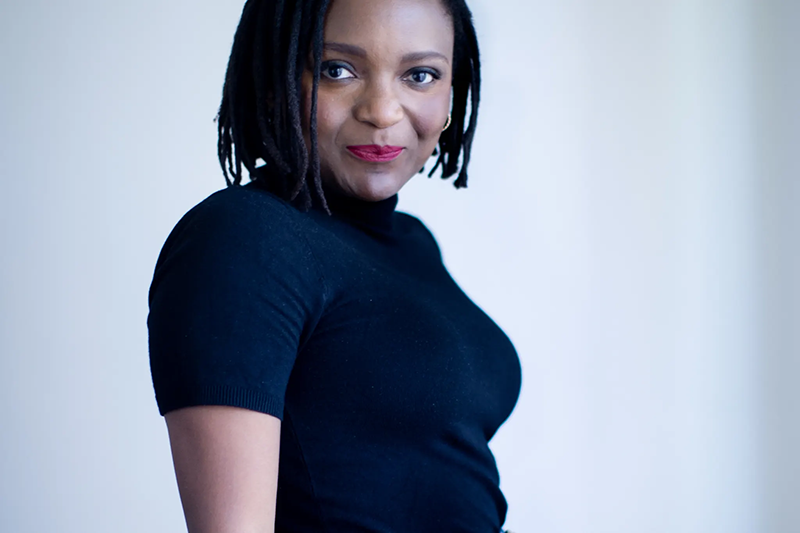 Christine “Kix” Mwaturura lays herself bare in her podcast Private Affairs, which details the ups and downs of being a black woman dating in a recently adopted country. And it’s paid off: the 36-year-old writer, radio DJ and podcaster has won the Jesse Cox Audio Fellowship, worth $15,000.

The fellowship was created in 2019 in honour of the late award-winning ABC audio producer Jesse Cox. It was set up by Cox’s widow, Que Minh Luu, who is director of content at Netflix ANZ, and a group of his loved ones including Benjamin Law, Clare Holland, Kali Reid, Jess Bineth and Scott Spark. Offered in partnership with podcast studio Audiocraft and production studio Unison, it provides a great opportunity for aspiring audio producers and is designed to support local and underrepresented voices.

Originally from Zimbabwe, Melbourne-based Mwaturura will be known to PBS radio audiences as the host of Afro Turn Up, a weekly show about contemporary African music.

She describes her six-episode fictional narrative podcast Private Affairs as a romantic dramedy, similar in tone to HBO’s TV show Insecure. She has big ambitions for her audio series, given a number of listeners have suggested she turn it into a book, YouTube series or even a TV show. The podcast was inspired by a character from a blog about dating she started soon after she moved to Melbourne in 2014.

With the fellowship money, she intends to create a second series of the show, which also won podcast of the year and best fiction podcast at the 2021 Australian Podcast Awards.

Although it is semi-autobiographical, Mwaturura is driven mad by people assuming the podcast is all about her. The presumption is understandable though, as the main character, Veronica, shares some similarities – including being a recent transplant to Melbourne from Zimbabwe.

“I don’t like to tell people what’s truth and what’s fiction but I do put a lot of myself into the story. Even the things that are made up, the emotions that are behind those fictional feelings are very real. I might borrow from other parts of my life,” she says.

Dating in Australia and America, where she lived before coming here, is very different to dating in Zimbabwe. “I find it very difficult to decipher whether a guy is flirting with me or just being nice. In comparison to being back in Zimbabwe [where] if a guy likes you, they will tell you quite plainly,” she says. “Here, it’s a lot more subtle in general. It is a lot harder to decipher people’s intentions. 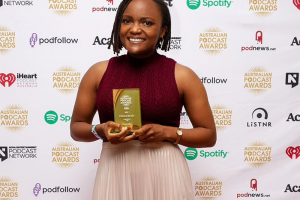 Mwaturura at the 2021 Australian Podcast Awards

“Generally guys don’t really approach me [in Melbourne] and I’ve heard – and I kind of speculate – that it may be because I am a black woman. There’s not a lot of us around so I don’t know if people are intimidated by that or they don’t know what to say or how to approach.”

“When I went to Europe I had no issues with starting conversations with people. The men in Europe seem to be onto something,” she says with a laugh.

A trained economist, Mwaturura was working fulltime at a bank until September last year, when she quit to devote her time and energy to her audio work.

Judges of the Jesse Cox Audio Fellowship this year were JCAF board member and audio producer Jess Bineth, head of development at Dreamchaser Monique Keller, and 2021 JCAF fellow and podcaster Jay Ooi.

Bineth says the fellowship was set up to support innovative, bold work and to play a role in uplifting and supporting voices that are otherwise unrepresented in the audio space. “Audio fiction is really hard to do well and in Australia Christine is leading the pack. She’s doing the writing, the sound design, the direction of actors, and she’s doing it all of her own volition.”

“She’s left her day job, this is what she wants to do and she has a really big vision for the Australian audio industry and how she wants to take people along,” she says. “She’s enterprising, she’s a businesswoman, and she’s coming at this in a very professional way. I can really see her as being a leader in this space.”

Bineth adds that the fellowship’s values of supporting and highlighting underrepresented voices are things that Jesse Cox really championed in his day-to-day.

“We really want to honour his work.”

Patrick Abboud won the inaugural Jesse Cox Audio Fellowship in 2020, using it to develop his eight-part investigative series The Greatest Menace, which this year won a Walkley Award. In 2021, the fellowship was won by Ooi, whose podcast Shoes Off went on to win gold for smartest podcast at the 2021 Australian Podcast Awards.