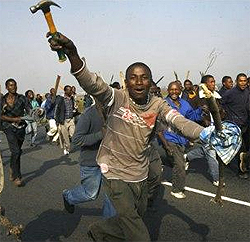 THERE is general consensus that the xenophobic attacks that have been happening in South Africa are unacceptable, and the fact that this most despicable behaviour is happening for the second time within seven years does not speak well for the reputation of South Africa.
Only some Zimbabweans have publicly written in exoneration of the hoodlums that have been tainting the impressive legacy of Nelson Mandela, and it appears the acquittal is motivated by the need to spite Robert Mugabe and his ZANU-PF party.
It is probably the first time in the post-colonial era where we have seen the majority of African countries publicly attacking the government of a fellow African country in a more vociferous manner than people outside Africa, including the often African-vilifying Western media. Africa is loudly appalled by the continuing xenophobic tendencies in South Africa, and the message has been coming loud and strong.
President Jacob Zuma has had his views and explanations as the head of both the ANC and of the Government of South Africa. As an ANC leader and cadre he reminded us of the historical importance of African countries to South Africa’s liberation cause. He reminded his audience that neighboring countries took bullets and bombs on behalf of South Africans, that some of them risked their lives smuggling weapons into apartheid South Africa, all in the solidarity aim of helping free oppressed siblings and kith and kin.
He publicly wondered what has gone wrong with us Africans in general, and with rogue South Africans in particular. He said when a family member does something that tarnishes the good name of the family, that family member must be isolated and shamed, and he said this is the attitude mainstream South Africa must adopt – isolating the heartless criminal hoodlums that have been at the forefront of these deplorable acts of madness.
It was rather sad to hear President Zuma saying his personal view is that the murderous deeds were actions of “common tsotsis,” taking advantage of tensions in the country.
He said this after he had just described how he could not cope with the trauma of a horrific image he had seen a few days before, an image of a decapitated person so brutally beheaded by South Africa’s own version of ISIS. The president was most likely aware that the victim of this gruesome murder had not been robbed of any belongings, but simply killed for the sole purpose of taking away her life because she had committed the most hated crime in South Africa at the moment – being a black foreigner. Advertisement