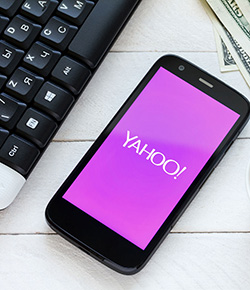 YAHOO is bowing out as a public company with its revenue still declining, a chronic problem that culminated in its sale to Verizon Communications.
Despite the revenue downturn, Yahoo fared better during the first three months of the year than analysts had anticipated – a low bar that was another sign of how far the internet pioneer has fallen during the past decade.
The results released Tuesday will mark the final quarterly report of Yahoo’s 21-year history as a publicly traded company unless the Verizon deal unexpectedly falls apart. Yahoo expects the $4.5 billion sale to close in June before the end of the second quarter.
The deal’s final price reflects a $350 million markdown that Yahoo gave Verizon to compensate for the damage caused by two different security breaches that resulted in personal information being stolen from more than 1 billion Yahoo user accounts.
After Verizon takes over, Yahoo’s $8 billion in cash and valuable stakes in two Asian internet companies – Alibaba Group and Yahoo Japan – will be turned over to a newly created company called Altaba. Yahoo CEO Marissa Mayer won’t be part of Altaba, and she isn’t expected to join Verizon to oversee the Yahoo email and other digital services being sold. If she doesn’t have a job, Mayer will receive a $23 million severance package.
Mayer, a former Google executive who has been Yahoo’s CEO for nearly five years, defended her track record in a statement accompanying the first-quarter numbers.
“I’ve never been more proud of the improvements we’ve made to the business and the value we’ve delivered to our shareholders,” Mayer said.
Yahoo’s stock has tripled during Mayer’s reign, but the run-up was driven by the company’s stake in Alibaba, which is China’s e-commerce leader and boasts a market value of $278 billion. The Sunnyvale, California, company invested in Alibaba before Mayer’s arrival.
Mayer had hoped to turn around Yahoo, but instead oversaw further erosion even while investing heavily in mobile applications and video. She couldn’t solve a problem that dogged Yahoo for most of the past decade – how to get a larger piece of the digital advertising sales that increasingly have been flowing toward Google and Facebook, a pair of companies that once were smaller than Yahoo.Advertisement