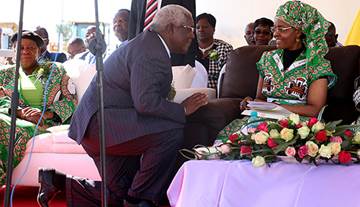 Five key reasons why Zimbabwe’s economy will be far worse in 2016
“Since international capital is a coward, no one is prepared to risk their money in a tiny overrated economy like Zimbabwe whose leaders are, in fact, giant pillaging marauders whose appetite for corruption and lawlessness makes that of the yakuza look like child’s play”.
ZIMBABWE’S economy is leaking like a sieve. On second thoughts, that is an understatement, the economy is crashing like a waterfall! This started in 2013 when its ruling party Zanu PF, under the misguidance of Robert Mugabe, took sole charge as captains of the Zimbabwean ship soon after the GNU.
In 2014, I co-wrote a commissioned paper for some of Japan’s largest corporations that work with our institute. It was about Zimbabwe’s prospects as a destination for investment for the period 2015-2016. I intended to paraphrase and translate that paper as an op-ed at the end of 2014 for my Zimbabwean readers, but got way too busy to do it. Some of the issues I predicted in that paper are a reality now. In this op-ed, I use more or less the same basis to argue that Zimbabwe’s economy in 2016 will be far worse than it is now. This is explained in laymen’s parlance – no advanced econometric modeling and jargon.
And here are the top reasons why this will be a reality in order of significance.
Robert Mugabe
When capable chief executives join struggling companies, they infuse a dose of confidence that in some cases cause the firm’s share price to rise. For example, when Steve Jobs rejoined Apple in 1997, the company was worth $3 billion (just over half of Zimbabwe’s GDP of $5.2 billion the same year), but when he died in 2011, the company’s value has soared to a world-record $624 billion. Apple’s stock price rose more than 9,000% since Steve Jobs returned in 1997. In the meantime, Zimbabwe’s GDP had grown by only 100% to just over $10 billion in 2011, the same period that Jobs had grown Apple’s share price by more than 9000%.
My point here is: chief executives and their capabilities matter in growing or killing companies the same way they matter in growing economies. To use an African example, since Uhuru Kenyatta took over as Kenyan President in 2013, the Kenyan economy has added about $15 billion between 2013 and now to its $50 billion GDP of 2012. That is an addition of the size of the entire Zimbabwean economy in a space of two years. When Hu Jintao took over as paramount leader of China in 2003, the economy grew almost 800% from just $1.2 trillion in 2003 to 8.5 trillion in 2012 when he passed on the button to Xi Jinping. National chief executives therefore matter in changing the course of a country for better or for worse.Advertisement

Zimbabwe’s economy is has become worse than a headless chicken. It is going nowhere fast. As the chief executive of Zimbabwe, Mugabe’s ineptitude in matters economic is the stuff of legend. He is so incompetent that he has very little to show for his 35 years in power. Numbers don’t lie, and 35 years is long enough for any leader to show that they are incompetent. The record speaks for itself, and the fact that Zimbabwe uses its ‘enemy’s’ currency is a serious indictment on its leadership.
The only thing that Zimbabweans and non-Zimbabweans agree on is that the country has potential, but that potential will never be realized with that level of ineptitude in the highest office in the land. I understand that Mugabe has several degrees he earned in jail. Perhaps he should receive a new PhD on the fastest way to increase vendors on the street, and on how to kill an economy and cause hardship.
Mr. Mugabe seems very small minded, and blinded that he can hardly see far from his nose. He also seems oblivious to the suffering around him. In Japanese we say, I no naka no kawazu, taikai o shirazu, meaning a frog in a well cannot conceive of the ocean. Citizens get the leaders they deserve. Zimbabweans elected him. At 90, Zimbabweans made a record in recent years of electing the oldest president into office. The only other country to come close to this feat is Tunisia where Essebsi who is two years Mugabe’s junior was elected President in 2014. You may argue that Mugabe rigged his way into office, but the point is Zimbabweans allowed him to remain there.
Strangely, Mugabe actually thinks he owns Zimbabwe. No wonder he views the people of Zimbabwe as his subjects. He was recently quoted complaining about Côte d’Ivoire’s refusal to give his plane the clearance to land in Abidjan where he wanted to fly in an give a mere speech.
“The President cannot just go to a country without being cleared by another president who owns the country. That is the protocol. So what has happened? Then they said Ouattara has fallen sick. He is in bed. He is in bed and so no clearance was given. So we didn’t go to Cote d’Ivoire to deliver the speech to our African Development Bank. It is the only country in Africa that has denied us entry.”