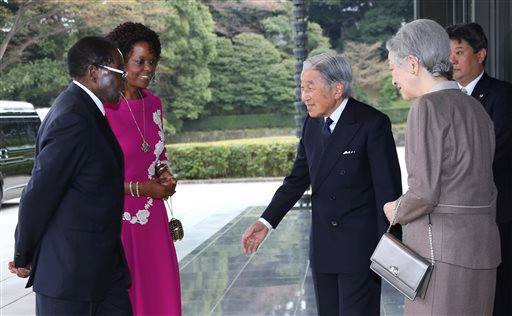 It’s downright silly if not mindboggling that presented with an opportunity to meet with the Prime Minister of a $5 trillion economy with cutting edge technology, Mr. Mugabe chose to fly to Tokyo with his wife and foreign affairs minister plus a coterie of pretty much useless hangers on that don’t add value to Zimbabwe’s very troubled economy.
ON Wednesday 23 March 2016, Mr. Robert Mugabe and his delegation left Zimbabwe ostensibly bound for Japan. Zimbabwe’s official media painted the trip as one of Mr. Mugabe’s daring moves to solidify his so-called ‘Look East’ policy. However, Mr. Mugabe did not arrive here until late on Sunday 27 March when he landed at Haneda Airport.
Mr. Mugabe was accompanied by his wife and foreign affairs minister, plus a large group of hangers on – most likely some state resources leeches. One key issue was a major driver for his trip – Japan’s foreign affairs agenda. Anything and everything else was peripheral.
Lessons on how to become a foreign policy poodle
Mr. Mugabe has since 2014 been concerned about Zimbabwe’s so-called all-weather-friend, China – driven by four key concerns. The first one is that nothing much in terms of a bailout has come out of this so-called friendship. This is in spite of official propaganda crowing loudly about what they termed ‘mega-deals’ and a Look East Policy bearing fruit. I have written before on this issue, and warned that nothing will come out of China or for that matter from anybody else.
You can read my articles here (http://bit.ly/25y4a3W ) The second reason is that Chinese leaders arrested a man who posed as China’s unofficial corruption channel to and fro Zimbabwe. Sam Pa, a man deeply involved in Zimbabwe’s election financing and well connected to Zimbabwe’s CIO was locked up in October 2015 under Xi Jinping’s corruption net, you can read the article here (http://bit.ly/1RauL24).
The third reason is that when Mugabe through his juniors trusted Chinese firms Jinan and Anjin with diamond mining licences (both firms are linked to the Chinese military), by 2013 the firms were scaling down operations in Zimbabwe after rapid extraction of gems. Both companies have the same directors such as Mr Zhang Shibin.  In fact, by 2013, Anjin was already looking for mining options in the DRC after concluding that it wasn’t interested in the more capital intensive mining of diamond conglomerates on its Marange claim. Anjin secured $5 billion worth claims in the DRC.Advertisement