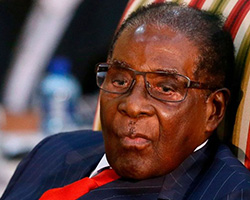 Zimbabwe is a shakedown economy where anyone with any form of leverage demands bribes from the next citizen in a position of weakness.
Your fate as Zimbabweans and the power to rescue yourselves is squarely in your hands. Exercise it.
Economies don’t die; they fade away like old soldiers.
Back in the early 90’s my favorite movie was called ‘Nowhere to run’. It starred Jean-Claude Van Damme as Sam Gillen, a convicted robber who escaped jail and was for a while at large, only to later turn himself in to the authorities because there was nowhere to run.
Last August, I put forward a gloomy 2016 prognostication of the economic situation in Zimbabwe found here http://bit.ly/22Gyzvt . I predicted then that the economy of Zimbabwe will be far worse in 2016, and laid out the reasons for that projection. The purpose was not to create a sense of alarm, but to help you prepare and create a plan A, B and C at the individual, household or company level.
At the time, I did not even factor in the ravaging effects of the current drought in the region. Neither did I factor in the disastrous collapse of prices on the commodities markets which strongly affect Zimbabwe because of its reliance on primary and extractive industries.
For example, you may not have heard, but Zimbabwe’s largest ferrochrome producer, Zimasco has now filed for bankruptcy protection by asking to be placed under judicial management. With the collapse of the takeover of Ziscosteel by Essar Holdings at the instigation of government ministers, this means that over the next few years, there won’t be much economic activity in the Midlands region of Zimbabwe.
Travelling from Nigeria to Singapore a few years ago, I read a Nigerian novel – it was strongly recommended by the bookstore at the airport. It was called Things Fall Apart. In that book was a character that had an endless propensity to borrow and not pay back. His name was Unoka.
Living on the edge – purveying a wages and salaries budget
In Bhuddism, there is a belief in the spiritual principle of karma, which refers to the cause and effect link that sometimes happens where an individual’s intent and actions have a bearing on what happens in their future.Advertisement