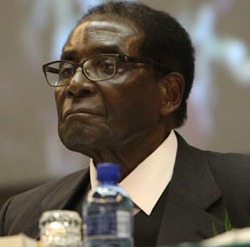 “Zimbabwe will not be transformed by a 1970s activist leader, but a true visionary with the gumption and grit to remove his imported suit, roll up his shirt, do practical work and build something from the ground up.”
While activists shape events, visionaries shape and change the world as they have such a long term view that they see beyond the horizon. Due to the poverty of vision, death of strategic insights and poor appreciation of global realpolitik, Zimbabwe is stuck in a retrogressive time warp, with a President acting out the inapplicable activist politics of the 1970s. For this reason, Zimbabwe will be stuck in its present rut for some years.
The Black Man’s Burden
A few weeks back, US based Zimbabwean professor Ken Mufuka, wrote about an issue I have wanted to write about for some time. It’s a theme I have noted in some of my writings to my Japanese audience. In his article, Mufuka Sensei wrote about the black man’s burden. He cited Michelle Obama’s speeches over the past few months as follows:
“During the last several weeks, she has used her lofty position, at graduation ceremonies, to lash out at the white society which has oppressed her people for so long.”
Michelle Obama San, according to Mufuka Sensei, speaks to a wider issue, an issue of being seen as a stalwart, no matter how non-strategic that can be. He writes;
“How many times and how long shall the children of Abraham complain about past injustices? In doing so, we miss an opportunity to help our people, to make friendships with Pharaoh’s children who rule the universe. But I suppose that is not the issue. The issue, as we say in Zimbabwe, is to show that one is a stalwart Africanist.”
A key issue I want to address that comes out of Mufuka Sensei’s contribution is: Barack Obama is a visionary genius and Michelle Obama, in spite of being a Harvard Alumnus is a genius activist. Therein lies the difference. Barack Obama knows very well that he cannot achieve his long term plans by behaving like an activist attacking the people who have powerful leverage that he needs to achieve his goals. Michelle Obama San can afford to behave like an activist because she is not the President. And therein lies the difference between African countries’ and their more economically successful Asian counterparts in how they relate with the West.Advertisement

In matters critical to the development and advancement of the lives of the people of Zimbabwe, Robert Mugabe is as clueless and as incompetent as they come. In today’s global matrix, international respect does not arise from speeches and activism. There is a lesson Africans in general and Zimbabweans in particular can learn from the Chinese. Decades ago, the Chinese reeked of poverty and scarcity and they did not have as much international standing as they now have. But they worked hard to transform their economy, creating a cadre of successful citizens that has earned the Chinese global respect. The Chinese did not have to take every international podium as a chance to give roaring speeches and demonstrate mindless activism, because they are acutely conscious of the reality that today’s realpolitik demands that your voice is equal to your political and economic achievements. And these achievements actually come from not just thinking, but doing and working hard.
Deng Xiaoping, credited with leading the modern day Chinese transformation was a quiet figure. He was a Ralph Bunche who worked behind the scenes to get things done. Deng eschewed conspicuous leadership positions in the Communist party and government. He NEVER held office as the head of state or head of government or General Secretary of the Communist Party of China. He was just acknowledged as the visionary and paramount leader. This is much unlike Robert Mugabe who gets an over-inflated ego when he is referred to as President and Head of State and Government, and Commander in Chief of the Defence Forces. The lesson is titles matter not, achievements count more.
Earlier I mentioned the Barack Obama and Michelle Obama contrast. So why has Obama been largely successful? The answer is that he fully understands realpolitik, and knows that he cannot be an activist, but a leader who must remain focused on a robust agenda and ignore the distractions around him. That’s what Zimbabwe needs now rather than later.  Activist leaders whose thinking remains in the 1970s will keep Zimbabwe behind, nailed back in the past while other countries like Kenya and Rwanda march full steam ahead. Emmerson Mnangagwa told a Chinese TV network that Zimbabwe is 20 years behind. I think that’s an understatement. It is more than 40 years behind!
Ken Yamamoto is a research fellow on Africa at an institute in Tokyo. He researches and travels frequently in Uganda, Kenya, Rwanda and Zimbabwe. You can contact Ken on yamamotokensan@gmail.com.