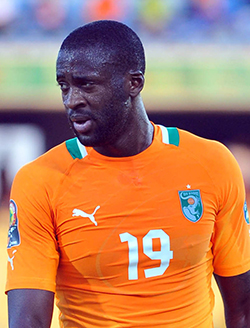 IVORY Coast skipper Yaya Toure has indicated he may hang up his international boots sooner rather than later.
The Manchester City midfielder lead the Elephants to their first African Cup of Nations title in 23 years just two months ago, edging rivals Ghana on penalties to lift the continental crown in Equatorial Guinea.
Yet fresh after two recent international friendlies, in which he featured in both the 2-0 win over Angola and the 1-1 draw with Equatorial Guinea, Toure has hinted he may end his international playing career soon.
“I think now my target is done,” the 31-year-old told BBC Sportsworld.
“I want to wait a couple of days for what I will decide for my future.
“The time for the youngsters will come soon and we need to let them go on alone.”
It seems Yaya will follow in his brother Kolo’s footsteps, after his older sibling announced his retirement from international duty after Ivory Coast’s Afcon success.
Yaya, who was only promoted to national captain last year after replacing Ivorian icon Didier Drogba, has made 95 appearances for his country since his debut in 2004, scoring 19 goals.Advertisement