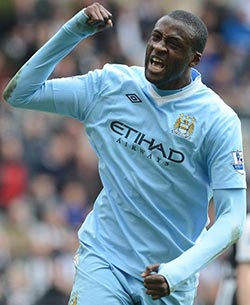 MANCHESTER City midfielder Yaya Toure has won the CAF African Footballer of the Year award for the third consecutive year.
The 30-year-old claimed the title after beating Galatasaray forward Didier Drogba and Chelsea’s John Obi Mikel in a ceremony in Lagos, Nigeria on Thursday.
The award, which is handed out by the Confederation of African Football (CAF), is decided by a poll of African national team coaches and technical directors.
Ivory Coast international Toure becomes only the second person to win the award three years in a row after Chelsea striker Samuel Eto’o achieved the feat between 2003 and 2005.
“I am very proud and very happy to receive this award, but would also like to congratulate my brothers, John Obi Mikel and Didier Drogba,” said Toure on receiving his award.
Toure had a strong year in 2013, helping the Ivory Coast qualify for World Cup 2014, playing in both legs of the Elephants’ play-off triumph over Senegal.
He was also the only African representative on the 23-man shortlist for FIFA’s World Player of the Year award and was also chosen by supporters in the Premier League’s Team of 2013.
Manchester City applauded Toure’s achievement, writing on their official website: “Everyone at the club would like to congratulate Yaya on his fantastic achievement.”Advertisement