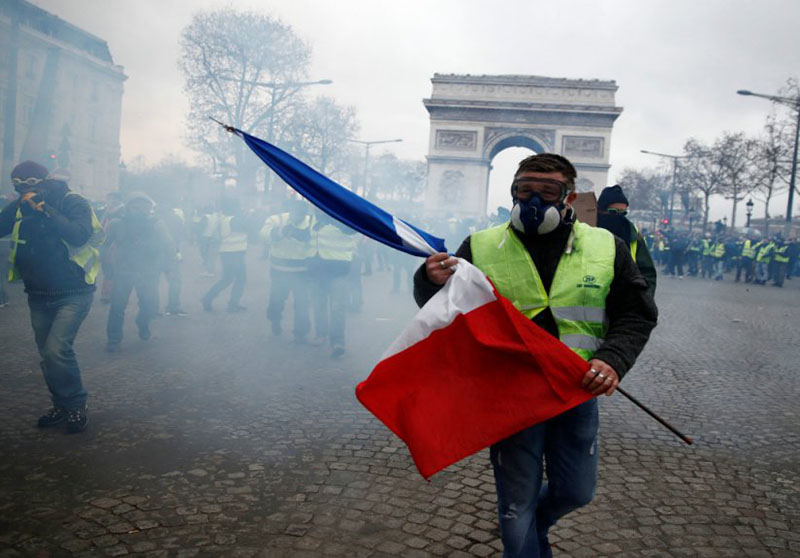 Thousands of “yellow vest” protesters returned to the streets of France to protest against President Emmanuel Macron’s policies, clashing with police in several cities in a challenge to his bid to quell the movement.

Police fired tear gas and water cannon to push back protesters at Place de la Bastille in Paris, one of the regular protest sites, as some demonstrators threw stones from a building site.

The local prefecture reported 223 arrests in Paris on Saturday.

The interior ministry estimated numbers for the 11th week of protests were at 69 000 across France, compared to 84 000 last Saturday.

In Paris, the official count was 4 000 demonstrators against 7 000 the previous weekend.

Clashes erupted too in western France in Nantes and Evreux and in the southern city of Montpellier, where a police officer was injured by “a pyrotechnic device” said a statement from the local prefecture.

In Paris and other cities, the yellow vest movement had called to continue the protests into the night. But police quickly dispersed several hundred protesters in the capital’s symbolic Republique square using tear gas, water cannon and stun grenades to clear the area, AFP journalists said.

The protests erupted in mid-November over Macron’s economic reforms, but have since grown into a wider rallies calling for the resignation of the former investment banker who critics say is out of touch with the economic struggles of ordinary French people.

‘Keep the pressure on’

The weekend’s protests against Macron’s tax and social policies came as divisions appeared among the yellow vests – named after the high-visibility vests they wear – as to where to take the movement.

In a new political development, a 31-year-old nurse named Ingrid Levavasseur said this week she would lead a yellow vest list of candidates for the European elections in May.

An initial survey in the wake of the announcement suggested they would garner a respectable 13 percent of the vote.

But not every protester appeared to welcome this development.

“There is a hard core that is ready to keep fighting,” said 42-year-old Gilbert Claro from the Paris suburbs. But the movement “is not meant to be political”, he added.

“We have to keep the pressure on in the streets,” to get their demands accepted, said Virginie, an activist in her 40s who said she had been involved in the protests from the beginning.

She and many other protesters want a citizen-sponsored referendum so ordinary people can have more of a say in government policy.

This idea has been consistently rejected by the government, although Macron made some concessions last December in a bid to end the protests.

Recent opinion polls suggest that he has regained some of the ground lost during the crisis, as he has put his case at a series of town hall events around the country.

The “great national debate” he initiated in response to the protests has nevertheless been dismissed as a public relations operation by many yellow vest protesters.

A “masquerade”, said Mathieu Styrna, a 36-year-old carpenter from northern France in Paris for the protests. His impression, he said, was that the participants had been selected.

Outside Paris, several thousand protesters were marching in Bordeaux and Toulouse in the southwest, two of the cities where support for the movement has been consistently strong.

In Bordeaux, police fired tear gas and water canon to break up small groups of protesters tossing fireworks and bottles as night fell.

In the Mediterranean port city of Marseille, members of the CGT union joined the protests and about a thousand protesters turned out in the eastern city of Lyon.

In the north, officials in the city of Evreux, Normandy, reported clashes there and damage to the police and Banque de France buildings.

A French court on Friday refused a bid brought by France’s League for Human Rights (LDH) and the CGT to ban the weapons, blamed for serious injuries suffered by some demonstrators.

The police authority in Paris announced the introduction of the cameras in a move for greater transparency.

On Sunday, supporters of the government will stage their first “red scarf” protest to represent what they say is “the silent majority” defending “democracy and its institutions” and denouncing the violence of the yellow vests protests.