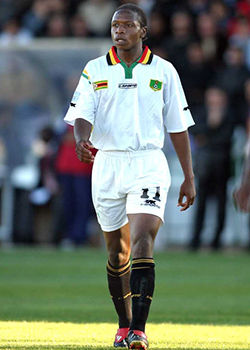 LIKE most players coming from Zimbabwe, Charles Yohane stuck with one team, Wits, was a loyal servant of the game and played for them for a decade, having started out at African Wanderers in 1995.
It was in 2009 that he quit football after a spell of mixed fortunes at FC AK. He reveals, “I gave up my playing career to go and coach. I was keen to start another life.” Yohane is currently a youth coach at Wits.
Charles, nice to have you on the Still In Touch this week! Having played for several teams in South Africa, where would you say you enjoyed your football career the most?
It has to be at Wits because I spent 10 years there. We didn’t use to go to camp a lot in those days, but when we did, my roommate was Alois Bunjira. We grew up together and played together in the juniors. He was my best friend in football in South Africa. If we were playing away, we would just chill and play music. One thing that Bunjira and I had in common was our love for music.
That’s how we used to get ready for games. We were not drinking at that time, but after the game, if for example we went to play in Cape Town, we would go out with the boys. We would have fun and watch the other guys enjoying themselves. He was a good guy and we used to advice each other and do extra training together. The funniest thing about him was that since he started growing dreadlocks, he gave too much of his time to his hair off the field, ha, ha, ha.
Who were the main characters at Wits?
Hmmm…we had a couple of those. Chance Gondwe was such a funny guy, when he joined us from Mamelodi Sundowns. Everything he said, you were bound to laugh. I remember one time we went to play Sundowns and we were warming up just before the game. It was a Wednesday afternoon. The Sundowns guys were knocking the ball around, just next to us, while we were busy running up and down the pitch. Chance said to the Sundowns guys, “Don’t kill us too much today, because by the time the game starts we’ll already be tired.” Ha, ha, ha.
Ha, ha! What’s he doing these days, by the way?
He travels a lot. Sometimes you hear he’s in Malawi and the next thing he’s in South Africa. He’s a pastor nowadays, can you believe it? Ha, ha, ha. He liked his beer after the game and sometimes the team bus would drop him off at his house after the game and he would go straight to the nightclub. He hated it when we had to do road work and I even remember one time, as we were all running, he just stopped running and said, “Ah, you can’t compare a Porsche and a big truck! I am a big truck and this is how far I can go.” He didn’t like hard work. He would tell our coach, the late Eddie Lewis, “Give me the ball, you’ll see me. Show me the road, you won’t see me.”Advertisement

Who’s been your funniest coach?
I know Roger de Sa has got a great sense of humour. You know, with Roger, you can laugh and work at the same time. We also had a Turkish coach, Jim Bone. He was strict but funny. I remember one time the guys were kicking the ball around and one of the guys hit him with the ball on his head! Ha, ha, ha, that day he made us run! Manqoba Ngwenya even went to the corner and started vomiting. Jim went up to him and asked him, “Are you done?” Manqoba said, “Yes, Coach.” The coach then said, “Go back and run!” Ha, ha, ha. I mean, the guy looked really sick but the coach wanted him on the field.
In one game, against SuperSport United, he instructed me not to come back into our own half, so that if our defenders get the ball, I should always be available to receive a pass. I followed his instructions to a tee and at half-time he was shouting and swearing at everybody. I tried to explain to him that for my part, I did what he had told me to do, but he just screamed, “Shut up!” But after the game, he was a lovely character and always used to say that football players must have a beer.
Great stuff! Tell us about your most embarrassing moment.
It was during my first game in South Africa, at African Wanderers. The club bought me a pair of Puma King boots on Friday and on Saturday we went to play against Orlando Pirates. But when I wore them, they were a smaller size and there was no time to go back and buy another pair. Just imagine, I played the whole game in small-sized boots. My toes were cramped and I was struggling, but I soldiered on. The coach asked me after the game, “Why were you running like that?” When I took the boots off, my feet had blisters. I couldn’t wear shoes for the whole week. My teammates kept on wondering how I survived playing in such small-sized boots. We were coached by Gordon Igesund and that was a very funny moment indeed.
What’s the funniest thing an opposition player has ever said to you?
A couple of guys would say, “Please take it easy, don’t run too much.” When playing in other African countries, people tried to intimidate you. I remember going to Cameroon with the Zimbabwean national team and Geremi was playing right-back for them. We went for a tussle and he bumped on me and I fell. When he was helping me get up, he asked me, “Hey boy, did you have lunch?” Before that it was me bumping on the other players and my teammates were just too happy to remind me about that incident. Sometimes the white opposition players would swear at me, but I got used to it. Craig Rosslee always tried to intimidate you during the game and tell you, “Today you are in for a tough game.”
Lastly, have you ever seen teammates fighting?
There were a few incidents, but the one that stands out is when Neil Winstanley was coming back from injury. There was this young boy, Themba, whose surname I’ve forgotten. He went into a tackle with Neil at training and it looked like it was deliberate. Neil chased him around the whole pitch, ha, ha, ha. So now we were chasing after Neil, trying to stop him from beating the small boy. As the boy was running, he saw Ivan Winstanley, Neil’s twin, in front of him, and then changed direction! But later Neil said that he wasn’t going to hit him and just wanted to scare him.
Tavern of Legends Fun Facts
Best player I’ve ever faced: Cyril Nzama
Best player I’ve played with: Alois Bunjira
Biggest pay cheque: R54 000
Smallest pay cheque: R2 500
Former team that used the most muti: AmaZulu
Favourite current player: Nyasha Mushekwi
Current occupation: Wits U15 head coach and BidBoys assistant coach
Former teams: Caps United, African Wanderers, AmaZulu, Wits, FC AK