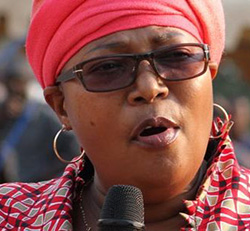 “You should be ashamed of yourself, it’s unAfrican, you are going to burn in hell. How could you do this before Tsvangirai is even laid to rest.”

HOURS after being elected as opposition MDC-T interim leader following a stormy national council meeting, Kuwadzana East lawmaker Nelson Chamisa clashed with party deputy president Thokozani Khupe at fallen leader Morgan Tsvangirai’s funeral wake.
As the MDC-T and nation mourned Tsvangirai’s death after losing his battle with colon cancer Chamisa rail-roaded the national council “stuffed with dubious characters” into appointing him acting party president for 12 months.
In his speech to mourners gathered outside party headquarters Harvest House in Harare, Chamisa promised to unite the party.
“I will make sure we all unite and work together. I will call Mudzuri and (Thokozani) Khupe to work with me; there will be disaggreements, but we will resolve them for the good of the country and our people.
“We must not be fixated with positions because we cannot all lead at the same time. Let us work to win elections in honour of Tsvangirai,” said Chamisa.
However, insiders said party secretary general Douglas Mwonzora and spokesperson Obert Gutu walked out of the national council meeting.
Mudzuri, Khupe, treasurer general Theresa Makone and national chairman Lovemore Moyo had refused to attend the meeting altogether, choosing rather to be at Tsvangirai’s funeral wake in Highlands Harare.
“Mwonzora and Gutu walked out. The party will likely split, Chamisa is pushing a gut-wrenching power agenda at a time when all people are grieving. Its nauseating for someone who claims to be a Christian,” said a senior party member.
While Chamisa was hoping he would find space to convince adversaries to accept his as party leader at least until the congress next year, this was immediately rebuffed after he was heckled by Khupe on arrival at Tsvangirai’s house.
“You should be ashamed of yourself, it’s unAfrican, you are going to burn in hell. How could you do this before Tsvangirai is even laid to rest.
“You could have at least waited for him to be buried before going ahead with your shenanigans,” Khupe shouted at Chamisa.
Chamisa tried to explain: “We did nothing wrong because we were only explaining to the people our situation.”Advertisement

Party leaders then went into discussions that went on for hours at Tsvangirai’s house before agreeing to shelf their fights until after the burial.
“The family requested that we unite and lay to rest our president. Khupe is going to South Africa to collect the body but it’s game on after the funeral,” NewZimbabwecom heard.