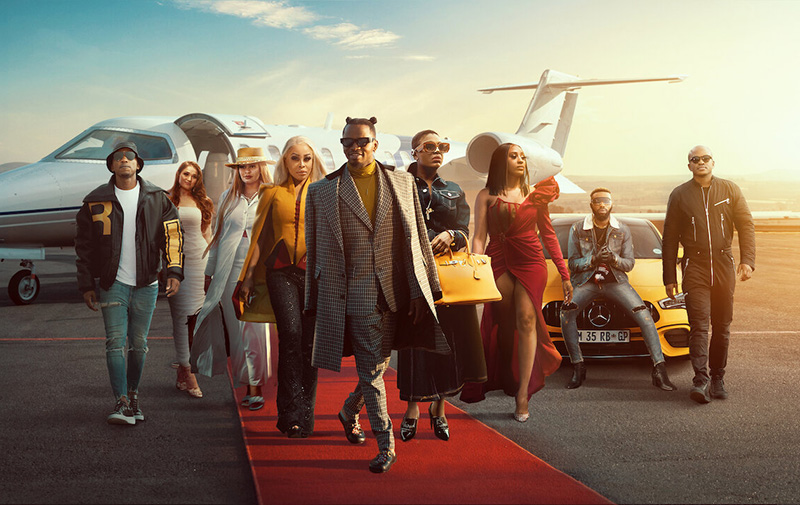 The show follows the drama, romances and lives of a group of 30-something year old famous Africans with insane wealth living their best, most lavish lives.

Set in the richest square mile in Africa in Johannesburg, the eight-episode series features 11 cast members from music stars and actresses to stylists and media personalities.

From the first episode, the self-professed ‘cougar’ has definitely stolen the show.

Leading the cast, Khyani is a well-known actress who first rose to fame in 2004 when she starred in South African soap opera Mzansi.

She’s also a businesswoman and has created her own line of gin, and released her biography in 2012.

Khyani’s husband, Kudzai is a Zimbabwean musician, whose net worth is rumoured to be around $5million (£3.8million).

As of yet, the 28-year-old doesn’t appear to have social media at all.

In 2020, he was the first sub-Saharan African artist to earn over one billion YouTube views.

The self-proclaimed ‘player’ is also a dad-of-four, with three different women.

Annie is a Nigerian model, presenter, and actress and the wife of 2Baba.

She has acted in more than 200 films and several TV series, and in 2009 was nominated Best Supporting Actress at the Best of Nollywood Awards.

2Baba, formerly known as 2face, is a Nigerian singer-songwriter and entrepeneur.

Annie and 2Baba have been married since 2012 and have two children together.

South-African born Zimbabwean rapper and TV personality Nadia with a pretty big fan following behind her.

The 31-year-old was recently nominated for ‘Artist of the Decade’ at the 2021 South African Hip Hop Awards.

She’s described herself as following in her family’s footsteps of being a ‘powerful, strong, opinionated woman.’

The 30-year-old has dressed some of the biggest African stars including Tonto Dikeh and Ice Prince, and co-star Innocent ‘2Baba’ Idibia.

Ugandan businesswoman and musician Zarinah Hassan is the heir and CEO of Brooklyn City College, which she co-founded with her late husband Ivan Ssemwanga.

The 41-year-old socialite attended school in London from an early age.

This isn’t his first time on screen, as he previously appeared in the Real Housewives of Johannesburg with his then-wife Naledi Willer.

Quinton, 40, is now in a relationship with footballer Kayleigh Schwark.

27-year-old Kayleigh posts her glamorous life on Instagram, yet she still remains a bit of a mystery.

The show labels her a socialite, although MailOnline have stated she is a human resources consultant.

Last but not least joining the A-list cast is 40-year-old TV personality who hosted various shows like The X Factor South Africa and The Search: E! Host South Africa.