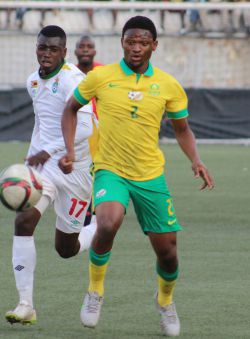 NATIONAL Under-23 side displayed a pathetic performance as they were held to a 1-1 draw at home by South Africa in the first leg of the African Championships at Rufaro on Sunday.
South Africa midfielder Dolly Keagan the stand out player on the afternoon, scored the crucial away goal that will come in handy in the return leg in two weeks-time.
The stylish midfielder received a pass from Siphelele Ntshangase who dispossessed an out of sorts Young Warriors captain Wisdom Mutasa.
Pasuwa’s men however, levelled matters on 83 minutes through Walter Musona who converted a penalty after the visitors’ captain Ishmael Mngonyama handled in the penalty area.
The Young Warriors defended deep in their half and they paid dearly for it in the end as they allowed the visitors to score a crucial away goal. But it was the home team who had appeared to be in control in the first few minutes of the first half in which they had two corner kicks in seven minutes.
Musona also came close on 20 minutes but his free kick, near the penalty area, was saved by the keeper.
South Africa could have surged ahead on 33 minutes but goalkeeper Tatenda Mukuruva produced a fine save from Ntshangase.
Zimbabwe had Thomas Chideu stretchered off the pitch after 35 minutes because of injury.
Pasuwa’s men came into the second half showing a lot of verve and threatened with some fine raids. However, Kuda Mahachi, the only foreign based player in the team, struggled and was eventually substituted for Carlos Rusere.
Captain Wisdom Mutasa was also substituted with Knox Mtizwa coming in for him. However, South Africa remained the dominant side.
South Africa coach Owen Da Gama praised his charges for their performance but said he was not happy with the behavior of the home team supporters whom he said intimidated them by hitting and knocking on their door before the match.
“Despite the intimidation from the home team, we played well. They tried to intimidate us by hitting and knocking on our door.  If you come to South Africa we will treat you professionally.
“But despite the intimidation we were well received here. Credit goes to the team, Keagan ran rings around them throughout.  If he can play at Rufaro, he can play anywhere in the world. It is a very difficult place to play.”Advertisement

“Zimbabwe didn’t give us any problems, Mahachi zero, they took him off, minus one and their captain (Mutasa) they took him off. But I was disappointed with the penalty decision for the home side,” said Da Gama.
Pasuwa however, remained confident of qualification.
He said: “Going to South Africa is not like going to Cameroon. Its our second home. We can go there and draw like they did or pull out a win. We didn’t win a lot of balls. We were not quick to win the ball back when we lose it. We need to have a lot of movement going into the attacking third. We need to have more time to prepare for the second leg.”
Teams: Zimbabwe: T Mukuruva, B Moyo, P Mpelele, L Mhlanga, T Hadebe, J Takwara, W Musona, W Mutasa (K Mtizwa 71st), N Masuku, T Chideu (M Sibanda 39th), K Mahachi (C Rusere 69th)
South Africa:  R Goss, I Mngonyama, T Rikhotso, Z Macheke, A Mobara, S Zulu, A Kongobe,(D Zuma 58th), S Ntshangase, K Dolly, M Modiba.