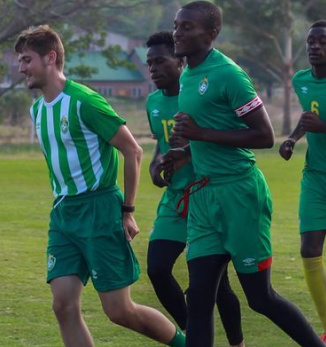 AFTER enjoying a steady in domestic football over the last couple of years, Young Warriors skipper Munashe “Tetso” Pini has expressed his desire to use the upcoming COSAFA Under-20 Championships as a springboard to secure a lucrative contract outside the country.

Pini, who has in the past been extensively profiled by NewZimbabwe.com after his goal scoring exploits in division two for Harare-based Total Football Academy before being signed by Premiership side Chicken Inn, will skipper the Young Warriors side in South Africa.

After being entrusted with the captaincy duties, Pini told NewZimbabwe.com in an interview that he would be aiming not only to secure positive results for the Young Warriors but also impress foreign scouts who will be searching for talent at the regional tournament.

“We are going to South Africa to do our best to win and do well for the country; that is the main goal but personally it’s also an opportunity to market ourselves and hopefully secure professional contracts outside the country,” Pini said.

“We know scouts will be there watching our matches and if we win, scouts will want to have a closer look at our team. So, it’s important that we do well.

Pini joined the Bulawayo side Chicken Inn this year after an impressive campaign for the Justin Kabetha-coached Total Football Academy side in their maiden season in ZIFA Harare Province Division 2B.

Sadly before he could make his Premiership debut for the Joey Antipas-coached side, all sporting activities were halted as part of government efforts to contain the spread of the coronavirus.

“To be included in the Young Warriors squad is something that came by surprise, because since May, we didn’t play soccer. So, I just want to thank God for this opportunity to play alongside the best Under 20 players in Zimbabwe. I am excited about the responsibility of being captain and I will give my utmost best. I feel everyone is ready for the tournament and we can push all the way,” said Pini.

Zimbabwe meet pre-tournament favourites South Africa in Port Elizabeth on Thursday, in the opening match of the tournament, which will run up to December 13.

The Tonderayi Ndiraya-coached Young Warriors are also in the same group with Mozambique and Lesotho.

The group winners progress to the semi-finals of the competition which will also act as a zonal qualifier for the 2021 Africa Under-20 Cup of Nations.

The two finalists are set to advance to the continental showpiece that is scheduled for Mauritania next year.