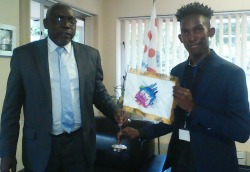 YOUNG Zimbabwean graphic designer Quentine Nyoni, 22, has won the African Union (AU) 2017 Logo Design contest beating 30 applicants from all corners of the continent.
The official 2017 AU Theme Logo will feature on communication materials and publications throughout the year and beyond.
The logo design represents the theme of the year “Harnessing the Demographic Dividend through Investments in Youth”.
In a first of its kind activity for the AU, young African designers had the opportunity to enter a contest that sought to identify a logo that would best represent the annual theme.
Nyoni emerged as the successful applicant and he was subsequently awarded with the contest’s US $1000 prize money and invited to attend the 28th Ordinary Session of the Summit of the AU.
The young designer said his design features “the element of hands and different gender symbols reaching towards each other and demonstrates the desire of Africa’s young men and women to work together towards harnessing the demographic dividend”.
He added, “The bars that protrude in and out of the African map represent the statistics that prove that the continent is currently experiencing and will continue to experience a youth bulge.
“Furthermore, the red, green, blue, pink, yellow and black paint splatter denotes youthfulness and conveys the diversity of the people living in African states.”
The logo design contest was launched by Dr. Martial De-Paul Ikounga, AU Commissioner of Human Resources, Science and Technology, during the 2016 Africa Youth Day commemoration on the 1st of November last year.
Nyoni was also invited and attended the 28th Summit of the AU which took place from 30-31 January 2017. It was attended by African Heads of State and Government and others such as António Guterre, the Secretary General of the United Nations.
In Addis Ababa Nyoni participated in a number of exciting events and sessions and was part of the Youth precession of the opening ceremony where he got to present the official AU flag, with his logo on it, to African Heads of State and Government.
“It was truly an honour and an amazing opportunity to represent young people and Zimbabwe on such an international platform.”
“Dr. Martial De-Paul Ikounga advised me not to give up on my dream, continue with my education and if I am ever thinking of pursuing international development, the doors to the African Union are open to me.”Advertisement

Nyoni dreams of one day launching his own multimedia company, through which he hopes to foster talent in other young Zimbabweans.
He said, “I want to broaden my horizons and learn more about development and youth issues to gain a better insight into what I experienced last week in Addis Ababa.”