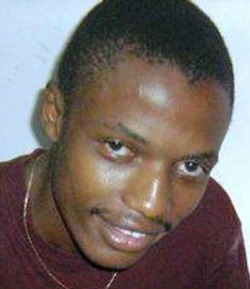 GOSPEL musician Dereck Mpofu has produced an 11 track album which chronicles the economic hardships Zimbabweans experience daily.
In the project, Mpofu collaborated with Afro-fusion queen, Cynthia Mare, Afro- Jazz musician, Pamhidzai Tracy Mbirimi, known as Pah Chihera, and Zim dancehall artist, Shinso-man (real name, Romio Anthony).
The new project, Godobori, is expected to hit the airwaves this Thursday (16 February). The youthful Mpofu, who is also the Harare city environment ambassador, said he was currently polishing up his latest work.
In an interview with NewZimbabwe.com in Harare at the weekend, Mpofu said the 11 track project is expected to be a hit because of the mixed talent involved.
“This is a unique project done by a unique combination as you can see by the names of artists involved,” he said.
“What is also interesting is how we came up with the album Godobori which is now my nickname a client gave me when he came to the studios while we were recording and asked me to assist him to edit his script (song), play instruments and back them.
“While assisting him he said he was surprised by the multifaceted gifts that I possessed and said “uri godobori”.
Mpofu added: “To me, the title represents the years of hard work it took me to get refined enough to get to where I am and that now I am ready to unleash my polished self to the world”.
The first and main song of the project is called Mari which talks about the everyday hustles in Zimbabwe.
Ndinokakama is the second and is about a guy failing to lure a woman of his dream because of stammering.
The third song is Ngirozi, which is a love song from a guy who has fallen in love with a girl whose beauty he equates to that of an angel.
Mweya wechiZimba is the fourth song in which Mpofu thanks Zimbabweans for their resilience, tenacity and longevity as a people.
Mare is featured in the song, Dzoka Kumba, where they sing about love, separation and reconciliation while Shinso-man is featured in the track Higher.
In the eighth song, Chikwambo he sings about the gullibility of society which associates every success with magic.
Unorema talks about how tough life is. He also dedicated the song Mafans angu dairai to his followers whom he said “have been there for me through and through”.Advertisement

Dzefunde, which features Pah Chihera, is the last song.
Mpofu has released four albums to his name. They are Handizirini in 2010, Dr Philosophy in 2013, Mr Green Ambassador Sir, produced in 2014, and Diplomatic Alliances of 2015.