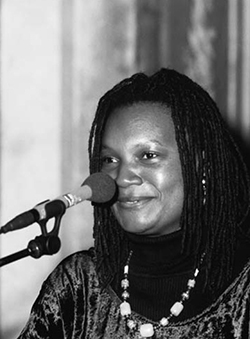 THE late Yvonne Vera’s astonishing novel, Without a Name, has been adapted into a stage play to premiere at this year’s edition of the Intwasa Arts Festival.
The spring festival will this year be held from September 21 to 26, under the theme: “My Intwasa, Your Intwasa, Our Intwasa, Let’s make it bigger together”.
According to the programme, the dates for the play are Monday 21 September and Friday 25 September 2015, at Bulawayo’s premier theatre venue, Bulawayo Theatre.
The one-week festival takes place in several spaces within the city of Bulawayo.
To date Intwasa has hosted regional and international artistes from Botswana, Swaziland, South Africa, United States of America, UK, Sierra Leone, Kenya, Zambia, among a host of other countries.
Vera’s book is part of the festival’s adaptation program that seeks to breathe new life into local stories that were written in either prose format or other media forms through the festival platform, particularly the theatre program.
In 2014 the festival, in partnership with the City of Bulawayo, commissioned the adaptation and staging of Mayford Sibanda’s Ndebele novel Umbiko kaMadlenya.
The project was a huge success, winning all NAMA theatre awards for 2014. Umbiko kaMadlenya collected the best actress award, best actor award, best director award and was voted the best production.
“This year’s focus is on Dr. Yvonne Vera’s Without A Name,” said festival director, Raisedon Baya.
The play is being directed by veteran actor and theatre trainer Memory Kumbota. It features NAMA award winning actress Bathabile Dlamini in the lead. She is ably supported by actors Zenzo Nyathi and Gift Chakuvinga, Nomvuyiso Mpofu and Musa Sibanda
“Additional writing is done by Stanley Makuwe, a Zimbabwean playwright currently based in New Zealand.”
Without a Name is a gut-wrenching play set amid the turbulence, instability and uncertainties of Zimbabwe’s struggle for independence.
The play, astonishing in its power and ability to reach the depths of bewilderment and despair, is a cheeky re-imagination of the late Dr. Yvonne Vera’s commonwealth nominated novel of the same name.
The story follows Mazvita whose dreams of freedom change drastically the night she meets freedom fighters in her village during a pungwe. She leaves her village for the city, the city which seem to offer her promises of freedom.Advertisement

The fragile dialogue makes Without a Name one of the most refreshing plays to come out of post- independence Zimbabwe.