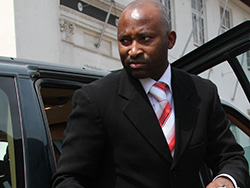 THE third edition of ZAA South Africa is fast approaching and Zimbabwe’s high flying beau’s and belle’s will gather at the Maslow Hotel in Sandton, Johannesburg, on Saturday 10th December to toast the success and achievements of this year’s nominees and winners.
Organisers of ZAA South Africa have announced that they will, this year, give recognition to legendary sports stars, musicians and actors who have broken barriers locally, regionally and internationally over the years.
ZAA Chairman Conrad Mwanza has also announced football ace Peter Ndlovu in his honorary list.
“This year’s honours list reflects the hard work of several individuals across a number of industries, whose talent, dedication and perseverance has influenced a new generation of sports stars, musicians and actors,” Mwanza said.