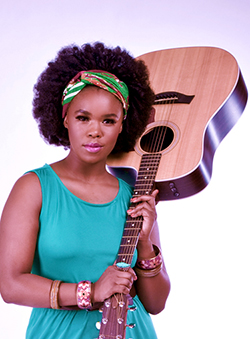 ORGANISERS of the People’s Awards to be held at the Harare International Conference Centre on December 5 have assured fans that top South African artiste Zahara will fulfil her Harare show.
They insisted that “nothing is going to stop her from obliging her legion of Zimbabwean followers”.
The show was confirmed by Lawrence Chinoperekwei of Devine Assignments in an interview with NewZimbabwe.com earlier this week.
South African diva comes to Harare for a performance which will see a line-up of local acts like man-of-the-moment Jah Prayzah and Suluman Chimbetu also taking to the stage.
“If Zahara fails to pitch up, then Harare will be shut down.
“What this means is that she will definitely be there for the show and what we can promise people is nothing but fireworks,” Chinoperekwei said.
This is not the first time that Zahara has performed in Zimbabwe. In 2012, the award-winning singer performed in Harare at a concert where she left her fans craving for more.
In 2013, the songstress obliged the call by followers to make a comeback and she lived up to her billing, sharing the stage with Zimbabwean music grandmaster Oliver Mtukudzi.
The “Loliwe” hitmaker – whose real name is Bulelwa Mkutukana – will, this time, alternate on stage with local artistes Jah Prayzah and Suluman Chimbetu, both of whom are favourites of many.
The song “Sean Timba” on which Suluman featured Jah Prayzah, is without doubt going to be one of the hits of the night when the duo collaborate on stage to wow their followers.
Zahara, on the other hand, will be out to prove why she is a darling of many Zimbabwean music lovers when she belts out her catalogue of hits that have made her the star that she is today.
This is the reason why she has shared the stage with the likes of Oliver Mtukudzi, Diana Samkange, Willis Wataffi and Cynthia Mare, among others.
Recently, Devine Assignments brought in Busy Signal to Zimbabwe.Advertisement