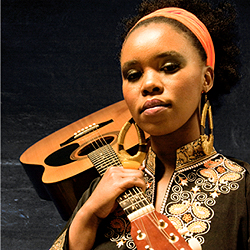 BULELWA Mkutukana best known by her stage name Zahara is set to perform in the United Kingdom at the Mofaya Summer Festival.
The South African songstress released her debut album “Loliwe” in 2011. The album went double platinum in just over 17 days, selling more than 100,000 copies in South Africa alone.
Zahara will share the stage with world renowned DJ Sbu who is also launching Africa’s first black owned energy drink “Mofaya” at the festival. This will be DJ Sbu’s first show in the UK in years.  He announced the exciting news in a tweet: “Passion Beverages in the house. The African dream is about to come to pass. Our lord has a great sense of humour.”
The Mofaya Festival is building on the success of the Zim Summer Festival 2015 and the organisers are expecting a sell-out crowd this year, says Stephen Manjelo, the event (Mofaya Festival 2016) director.
Zahara and DJ Sbu will begin their tour in the UK on the 5th of August at Dolce Vita nightclub in Birmingham. Zahara will be signing CD’s on the night and DJ Sbu will be live on the decks delivering one of his DJ classic sets. Early bird tickets to this event are sold out, tickets at the door start at £10 and more after 1am.
On the 6th of August Zahara and DJ Sbu will be live on stage at the Mofaya Summer Festival supported by Zimbabwean acts such as Diana Samkange, Blackdiamond, Mathius Julius, Charlie Kay, Lamont Chitepo, Xavier & King Xoli, Kazz and a host of local DJ’s.
“This is an event not to be missed, we are bringing the best of Zimbabwe and South Africa together and we are looking forward to a great weekend of celebrations” says Shane Manjelo, one of the organisers of the Mofaya Summer Festival.
The event is being organised by Zim Summerfest, CMG Media, Dolce Vita (Birmingham) and Afro-Global Marketing Ltd and tickects can be bought on line via: www.mofayafestival.eventbrite.co.uk
Advertisement