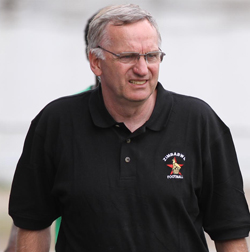 ZIMBABWE will have to fight for another day to reclaim the bragging rights in Battle of the Zambezi after falling to a Boniface Mwape brace to neighbours Zambia in an international friendly at Nkoloma Stadium on Sunday.
The last time Zimbabwe came here in August 2012, they lost 2-1 and they came second best again as the lively Zambians triumphed through Mwape’s goals either side of the break in the match held as part of the commemorations for the Gabonese air disaster that wiped out virtually the entire Chipolopolo squad on April 27, 1993.
And the match ended in a fitting tribute to the late Zambian football heroes as Mwape gave the hosts the lead in the 30th minute when he drilled the ball home from close range after the Zimbabwean defence failed to clear from a corner kick.
Roderick Kabwe whipped the corner kick from the left and the ball fell into the box but the Zimbabweans failed to clear and Mwape scrambled past Maxwell Nyamupangendengu.
The Warriors had been forced to make an substitution a few minutes before the goal when left back Augustine Mbara pulled a hamstring and was replaced by Nicholas Guyo who failed to produce the same spark that he ignited when he earned his first cap.
During the first half, Zimbabwe were made back edal for most of the time as the Zambians threw everything at the visitors especially with Alex Ndongo, who plays for Nchanga Rangers, outstanding.
The lanky player was lively and caused anxious moments each time he gained possession as he could either attempt a crack at goal from the wings or take the Warriors defence head on.
Zimbabwe were lucky not to be penalised when Felix Chindungwe twice handled inside the box as he made desperate attempts to thwart the raids initiated by Mwape but the referee ignored the pleas by the hosts for spot kicks.
The Warriors tried to build their attack with a short passing game from the back but were failing to take that into the opponents’ danger area.
In the end the Zambians stuffed the life out of the Warriors in their own half keeping the dreadlocked Chindungwe and Eric Chipeta, playing as the central defence, busy.
The duo were both making their debuts for Zimbabwe and lacked the composure needed at this stage.
Had they realised that their tactics were not working, the Warriors should have changed plan and opted for long balls to strikers Nelson Maziwisa and Tawanda Nyamandwe.Advertisement

Instead they kept faith to their short passes and forced their two forwards to come deep to search for the ball as the midfield failed to hit the right cords with skipper Masimba Mambare playing below par.
In the second half, half the Warriors made sporadic attacks when Ronald Chitiyo came into the picture while Last Chibwiro could have evened the scores when he did well to beat goalkeeper Rabson Muchelenganga but then lost his balance and directed his effort wide.
Gangly Prosper Matizanadzo could also have scored but directed his header wide and the Zambians again felt robbed when Chindungwe floored Mwape in the box and the referee pointed to the spot.
However, the assistant referee had his flag up for offside, which meant the ball was dead by the time Mwape beat the Chicken Inn skipper, and the call was the right one.
But Mwape killed any slim hopes the Warriors had to force a draw when he worked his way past Chindungwe on a counter raid and beat Liberty Chirava in goals in the 85th minute with a fine drive.
After the match, Warriors coach Klaus Dieter Pagels said his charges failed to gel because they only had two days of training before the match.
“It was the first time for some players for national duty and it’s really important that we identify players especially at the back .
“What I saw today was not good football in attack but we did well at the back and there is need to work harder in future.
“I think from this match, I have identified two players who can be used in the future and we have improve in every match,” said Pagels.
His Zambian counterpart, Herve Renard, was pleased with his rebuilding exercise that appeared to have taken off so well before an appreciative crowd that turned up for the Gabonese air disaster commemoration match.
“To play at a higher level you need experience and this was the first time for some of the players in the national team.
“So there were very motivated and they were playing their hearts out at home. The fans pushed us a little but we need a lot of work because a football match is never the same.
“We played lovely football but the most important thing today was the memory for our football legends who perished,” said Renard.
Teams:
Zambia: Jimmy Chisonga (R. Muchelenganga 45th min), Fackson Kapumbu, Bronson Chama, Kondwani Mtonga, Shadreck Malambo, Misheck Chila (Kangwa Chisale 66th min), Alex Ndonga (Domashono Malama 83rd min) Bornwell Mwape, Brian Chewe (Festus Mbewe 46th min) Rodwell Kabwe,
Zimbabwe: M. Nyamupangedengu (L. Chirava 45th min), F. Chindungwe, S. Songani (R. Chitiyo 46th min), A. Mbara (N. Guyo 27th min) H. Zvirekwi (G. Moyo 62nd min) M. Mambare , T. Nyamandwe, D. Chafa, N. Maziwisa (L. Chibwiro 46 th min) E. Chipeta (K. Moyo 81st min) N. Arufandika (P. Matizanadzo 50th min)