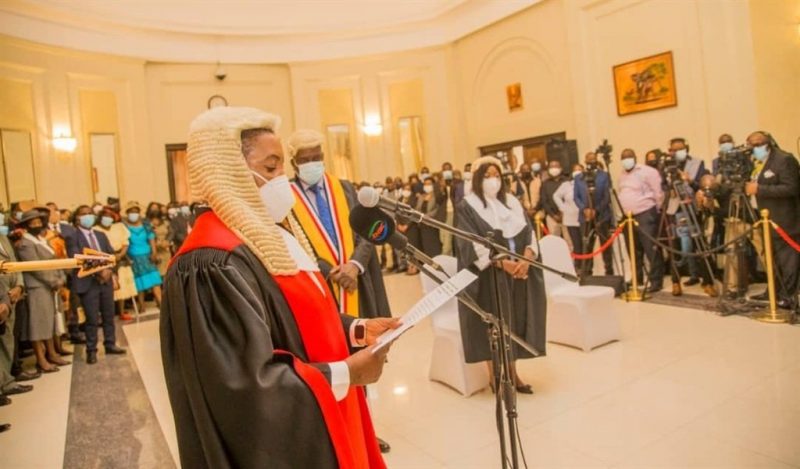 Nelly Mutti being sworn in as Zambia's first female speaker.
Spread This News

ZAMBIA’S parliament has elected its first female speaker, more than a week after long-time opposition leader Hakainde Hichilema was sworn in as the country’s new president.

Nelly Mutti, a lawyer based in the capital, Lusaka, was elected unopposed on Friday to replace Patrick Matibini, a retired high court judge who served as speaker for 10 years.

Mutti was sworn in along with her two deputies – Attractor Chisangano, a member of Hichilema’s United Party for National Development (UPND), and Moses Moyo, who was elected to parliament as an independent candidate.

In his address at the ceremony, Hichilema said Mutti’s election championed the cause of women in leadership roles in Zambia.

A human rights lawyer and a former chairwoman of the country’s anti-corruption commission, Mutti will have the job to preside over a parliament where the ruling party still needs the cooperation of opposition members of parliament to make constitutional changes.

Hichilema, who has promised a “new dawn”, fired several military, police, and prisons commanders just days into his rule.

The opposition and civil society groups have long accused the former government of using security apparatus to perpetrate violence and arrest critics.

Hichilema promised to let parliament operate independently and without any influence, urging legislators to give top priority to people’s welfare.

He will open the first session of Zambia’s unicameral parliament, known as the National Assembly, under Mutti’s leadership on 10 September, where he is expected to outline his vision for his government’s five-year term.