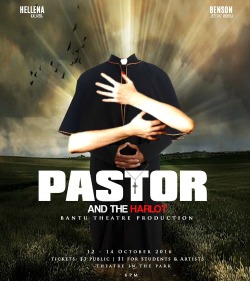 ROOFTOP PROMOTIONS will this week present yet another exciting international theatrical two men cast production at Theatre in the Park.
Titled ‘The Pastor and The Harlot’, the Zambian play by Empire Theatre Club is the second production coming from the neighboring country after the successful run of ‘A Love Song to The Impotent Son-in-Law’ early this year by the same group.
The second play was written and directed by Francis Malunga and will run from the 12th to the 14th of this month.
‘The Pastor and The Harlot’ is about a renowned preacher who believes that no one is beyond redemption. ‘Pastor Sam’ defies his ministerial ethics to help a traumatized and sexually abused young lady called Virginia who uses her past to justify her prostitution.
Pastor Sam is in a dilemma as helping the girl could lead to him being excommunicated by the church.
Full of suspense, drama and betrayal unfold as the story progresses with Benson Jeromy Mumba as Pastor Sam.
Mumba is a versatile actor whose artistic work can be traced back to his high school days. He has a collection of Best Actor Awards, supporting and cameo Awards to his name. They call him the future of Zambian theatre.
The ‘Harlot’ is award winning Gift Muneka-one of the most easily recognizable actresses in Zambia.
She has graced the Zambian stage from her school days, accounting for her winning the Ngoma Award at age 17 in 2004.
Since then, she has won various other awards and is widely traveled with several highly rated theatre productions.
Although she is largely a stage actor, she has also featured in television productions.
In “The Pastor and the Harlot”, the audience get to see this talented star at her most versatile best.