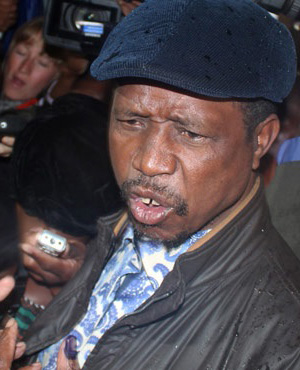 ZAMBIAN authorities on Monday dropped the case against a musician who was arrested over a bawdy song that lampooned the country’s president as a drunk incompetent.
Chama Fumba, 31, whose stage name is Pilato, struck a defiant note outside the court, saying he was not fazed by the case and vowing to continue composing similar songs.
Fumba was arrested last month and charged with conduct likely to breach the peace over the song, which allegedly defamed President Edgar Lungu.
At a court hearing on Monday, state prosecutor Like Pumulo said he had instructions from Zambia’s chief prosecutor to abandon the case.
But magistrate Aridah Chulu cautioned Fumba over his future choice of material.
Song’s lyrics
“You can go home, you are not acquitted, you can be re-arrested for the same offence,” Chulu said.
The song’s lyrics tell the story of a character named Lungu who grows up in a slum and becomes president.
The Lungu in the song is described as carrying a suitcase filled with bottles of Jameson Irish whiskey and having no idea how to govern.
“I am excited, just like I was excited when the song came out,” Fumba told reporters after the ruling.
“Hopefully I will continue doing such good songs.”
President Lungu, 58, a former defence minister, took office in January following an election after the death of his predecessor Michael Sata.
Lungu suffers from recurring achalasia, a condition caused by narrowing of the oesophagus, and has been regularly hospitalised for treatment.Advertisement