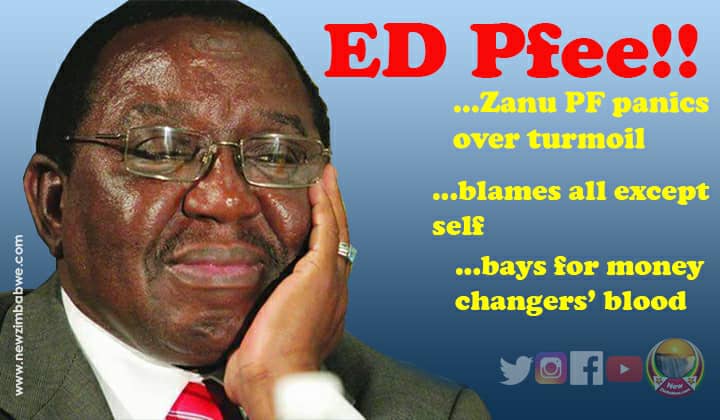 PRESIDENT Emmerson Mnangagwa’s Zanu PF has blamed the current economic turmoil on “saboteurs” as signs of panic over the crisis begin to set in within the ruling party.

In a statement, Zanu PF was Tuesday left fumbling for clues on what has hit the economy within the little space of time it romped to a two-thirds parliamentary majority on the back of pre-poll promises of better lives for all.

“It is therefore correct to suggest that there is a hidden hand in all what is transpiring in our economic scenario; economic sabotage is at play,” party secretary for information Simon Khaya Moyo said Tuesday.

Since the disputed 2018 elections, the country’s fragile economy has been on a perilous free-fall.

The plunge was even deeper when Finance Minister Mthuli Ncube announced a new tax on electronic transfers and further downgraded all bank balances to Zim-dollars among a raft of measures tailored to mend the economy.

Even more dramatic has been the local bond note’s rapid tumble to its lowest ever since introduction two years ago with one now requiring nearly Z$4 to acquire just a single US dollar.

Prices of commodities and services have sky-rocketed with shop owners now either demanding payment in US dollars or simply withdrawing some key products from the shelves to avoid incurring further loses.

Meanwhile, Zanu PF has blamed everyone except itself for the rot.

“Various forms and patterns of these forces have been manifesting, stretching from street peddling of currencies on the informal market leading to the speculation and fluctuation of exchange rates, gradually offloading of goods onto the black market for sale at exorbitant prices, artificial shortages of fuel and other essential commodities,” said the party.

“It is perturbing to note that these developments come at a time when the government has assigned colossal effort and attention towards the economy and instituted measures aimed at restoring the much need economic stability and growth.

“We believe that the emerging economic turbulence charactering our economy is a consequence of reactionary forces, misinformed perceptions, truancy and economic indiscipline by some individuals and entities in our midst riding on the back of the recent pronouncement of the fiscal measures through the transitional stabilization program by Finance Minister Mthuli Ncube.

“There is no doubt that if supported, these measures will deliver our great nation from the economic abyss to the promised land of milk and honey as pronounced in the vision of His Excellency the President and First Secretary of Zanu PF Cde E.D Mnangagwa.”

Zanu PF further said “the fluidity of exchange rate fluctuations on the informal market and the rampant price escalations are artificial and cannot be justified as they are not informed by economic fundamentals.”

In an effort to bring sanity to the fast unfolding economic catastrophe, Zanu PF proposed a list of solutions, among them the lifting of a 2016 import ban on selected items and a decree for prices to return back to where they were before.

“The revolutionary party calls upon the government to consider revoking SI 064/2016 in light of the current economic climate, directs government to immediately enforced the law to eliminate all forms of informal money market activities and business to and service sectors to strictly adhere to the principles of good corporate governance and ensure that goods and services are delivered to the people without artificial constrains,” said the party.

“Zanu PF calls upon all fuel suppliers not to withhold the supply of the precious product and ensure that all necessary measures are taken to stop the commodity from being offloaded onto the black market.”

“And the party directs the government to ensure that prices of goods and services reverts back to those ruling at the time prior to the pronouncement of fiscal and monetary policy measures.”