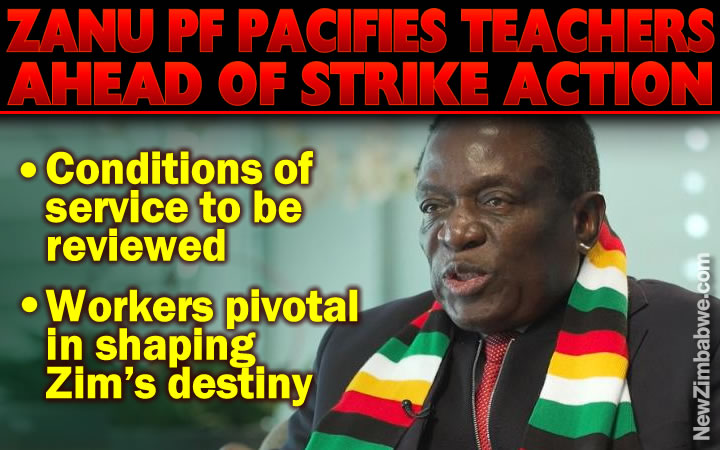 LESS than a month after sacking a reported 5000 nurses and under a week before teachers embark on what threatens to be a crippling strike, President Emmerson Mnangagwa has promised to review the working conditions of civil servants.

Mnangagwa told Zanu PF officials attending the ruling party’s manifesto launch in Harare that teachers, nurses and are critical to the country’s future.

“The Labour force is pivotal is shaping our destiny. The service of teachers, nurses and doctors will be reviewed for the betterment of their service,” President Mnangagwa said Friday.

He, however, did not give a timeline of when this will happen.

Teachers have declared they will not report for duty when schools open for the second term demanding a review of their working conditions. In response, government has warned it might be forced to use the same tactics it used on nurses last month.

In his Worker’s Day message to Labour last week Mnangagwa said his government was working on a new Labour law regime that would protect employees.

A statement posted on his official Facebook page last Tuesday parroted Mnangagwa’s now familiar “Zimbabwe is Open for Business” mantra saying he aims to create “more jobs, more opportunity and to provide our people with the greatest possible chance of success.”

“We must also protect our workers and ensure that they cannot be taken advantage of.

“That is why government is developing a raft of labour law reforms as part of our commitment to creating a safe and enabling environment for workers,” said the President.

Ironically, Mnangagwa’s government last month cut lose some 5000 nurses after they embarked on a nationwide strike demanding better working conditions.
Most of those fired have reported they had to reapply under new contracts meaning their pensions and benefits from previous service have gone down the drain.

Vice President Constantino Chiwenga accused the nurses of a political agenda and arm-twisted the Zimbabwe Nurses Association to withdraw a High Court challenge aimed at forcing the government to reverse the dismissals.

Doctors went on strike between February and March arm-twisting the government into reviewing their allowances.

Reports, three years ago, claimed Mnangagwa then Vice President was linked to a fuel company Zuva Petroleum whose High Court challenge resulted in the infamous July 15 2015 ruling that resulted in serious loss of jobs after employers were granted the right to walk out of a contract on three months’ notice.

The President has never refuted these claims.