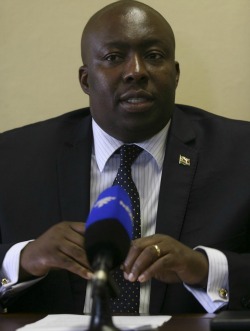 READING both the private and public press on a daily basis, one never misses reports on the so-called chaos and divisions in Zanu PF, with ruling party members and supporters allegedly fighting on factional lines to succeed President Robert Mugabe.
Sample these headlines: Zanu PF abusing war veterans (Daily News 19 March 2016), Msipa rips into Mugabe, (The Standard 3 April 2016), Mugabe savages Lacoste war vets, (Daily News on Sunday 3-9 April 2016), War vets dare Mugabe (Newsday 4 April 2016), Crisis as war vets defy Mugabe (Daily News 4 April 2016), Kasukuwere comes out guns blazing, (The Herald 4 April 2016), Zanu PF in series of indabas (The Herald 5 April 2016).
All these and other headlines not mentioned here paint a gloomy picture of what is happening in Zanu PF. Going by what newspapers are portraying, Zanu PF is on the brink of collapse. The party has been dogged by allegations of internal mistrust and divisions with members and supporters said to be against the leadership. War veterans, in particular, are said to be on the receiving end from those in leadership. On the other hand, those in leadership view the war vets as abusing their positions in the party by wanting to be treated favourably. The leadership see war vets as not toeing the line that they are expected to follow as they are allegedly pushing for leadership renewal.
As such, the war vets are said to be fighting Team Lacoste (Emmerson Mnangagwa)’s corner in the battle to succeed Mugabe. Ranged against them, it is said, is the so-called G40 faction (Grace Mugabe). What this means, essentially, is that Zanu PF is in a tug of war, a fight which the leadership must end soon to save the party from total collapse.
The situation on the ground, which the media cherishes, cannot be left to continue as the opposition could seize the moment and capitalise on it ahead of the 2018 polls.
Zanu PF has got the National Political Commissar (NPC) in the form of Saviour Kasukuwere and it is the duty of this man to make sure that the party is kept intact. Kasukuwere’s position should be regarded as that of a godfather and peacemaker in Zanu PF as he is supposed to unite the warring factions.
As National Political Commissar (NPC) of the party, Kasukuwere should make sure that those fighting on factional lines to create fictitious vacancies are stopped and made to follow the organisation’s ideology and principles. He should not be seen to be aligned to any of the factions fighting to dominate the ruling party. His position in the party should be that of a father figure, always ready to chip in and restrain his warring off-spring without ever taking sides.Advertisement

Kasukuwere should avoid being seen to be aligned to a particular faction. The issue of succession can and should wait until an appropriate time which, in this case, will be the 2019 National People’s Congress where the new leadership of the party will be elected to stand for the 2023 harmonised elections.
It is already known that President Mugabe was elected by the December 2014 National People`s Congress to be the Zanu PF candidate for the 2018 presidential elections and that position must be respected. The feuding factions must be reminded of this and be educated by Kasukuwere on the importance of observing the resolution so that the party remains intact.
It is unfortunate that Kasukuwere has found himself in situations where he has been accused of targeting party members said to be from certain factions which he is allegedly not in favour of.  It has been reported in some media houses that in one of the party rallies he was heard saying “gloves are now off” indicating that he was ready to fight against other party members. Such a development, if true, was very unfortunate as Kasukuwere should not be taking sides in those factional fights. He should unite the party instead of dividing it by taking sides. Actually, Kasukuwere must stand like President Mugabe who supports neither of the factions.
Kasukuwere needs to realise that he is the centre of all Zanu PF activities and if the party were to lose in the 2018 harmonized elections, he would go down in history books as the ruling party’s worst Political Commissar ever.
While it is necessary to discipline those members of the ruling party found to be acting waywardly, Kasukuwere should not single handedly carry out suspensions without the authority of the National Disciplinary Committee (NDC) which has the prerogative to deal with such issues.
The NPC should make sure that Kasukuwere cannot issue statements that are viewed by those against his preferred faction as derogatory and divisive. While he might deny that he belongs to another faction, allegations from the so called Team Lacoste fronted mostly by war vets, are that he has a soft spot for the G40 faction making his judgements on the internal feuds rather questionable.
Kasukuwere’s recent handling of the Midlands and Masvingo as well as Mashonaland East fiascos allegedly left a lot to be desired. When he suspended Kizito Chivamba, Ezra Chadzamira and Joe Biggie Matiza as provincial Chairpersons of Midlands, Masvingo and Mashonaland East respectively on allegations that they mobilised Zanu PF supporters to snub President Mugabe`s AU welcome rally in Harare many of us were left with more questions than answers. Some people expected him to pick their deputies as acting provincial chairpersons but to the public’s surprise Kasukuwere chose to handpick his preferred candidates to fill such vacancies leaving supporters of those affected ignoring his instructions, nearly sabotaging the February 21st Movement celebrations.
Such a development would have been avoided if Kasukuwere had left everything to the NDC to deal with such cases decisively.
So, Kasukuwere could still make sure that the party remains united by avoiding acting as if he was fighting for the supremacy of another faction over another. He should desist from issuing statements that seem to be targeted at another faction. Actually, he needs to make sure that the party is united so that the emergency of the Zimbabwe People First (ZimPF) is neutralised. Divisions within the ruling party could make ZimPF stronger than unexpected as those who would be disgruntled could join that party.