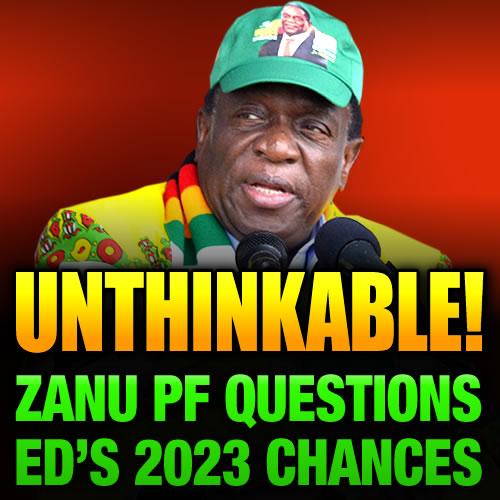 Mnangagwa, whose endorsement as the party’s presidential candidate is set to be reaffirmed at Zanu PF’s congress in October, will square up against a seemingly formidable rival, Citizens Coalition for Change (CCC) candidate Nelson Chamisa for the second time.

They clashed in 2018 in a poll that was so disputed it had to be settled at the Constitutional Court, which upheld Mnangagwa’s waffer-thin victory over Chamisa.

But since then, Mnangagwa’s tenure has been replete with legitimacy questions, external and internal.

For instance, a Zanu PF member, Sybeth Muzengezi, is suing Mnangagwa’s legitimacy at the High Court.

Previous press reports have also suggested that senior Zanu PF officials are worried about the party’s capacity to win the election because of a debilitating economic crisis which they fear has alienated the party from voters.

Senior Zanu PF executives told NewZimbabwe.com off the record Wednesday that the fear an election defeat was growing with each passing day as the economy further nosedives.

“People are hungry and angry, and they know Mnangagwa’s administration is the one which has put them in that position. I operate from areas around Mahusekwa and can tell you the people are not happy,” a senior party member said.

“Our provincial leaders and national leaders know that the party is not in the best position with the general election barely a year away. What has however been confusing a lot of people is how the president is apparently out of his depth in terms of solving the country’s problems. We though he probably had a plan that could change people’s views by 2023; but as it stands most of us believe he will not win, not just in urban areas but the rural areas too,” the source said.

The 2023 elections will be held against the background of a weakening local currency which has resulted in prices of basic goods and services rocketing over the past few weeks.

Added the source: “The (Joseph) Chinotimba video is not just a reflection of his own constituency, a number of comrades are disgruntled, some have even questioned the purpose of his advisors if the situation is not improving.”

Chinotimba, the Buhera South legislator was captured in a video accusing Mnangagwa of having imposed a candidate to contest against him ahead of the party’s congress.

Zanu PF has since independence enjoyed support in rural areas, which is widely a result of state-sponsored violence.

Efforts to get a comment from Zanu PF spokesperson Chris Mutsvangwa were fruitless as calls on his mobile phone went unanswered.