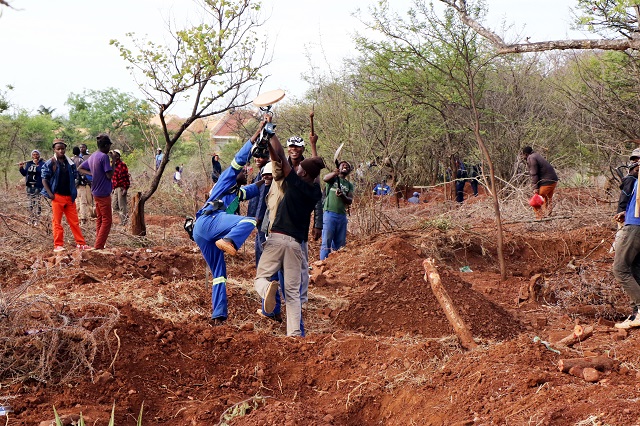 ZANU PF politicians in the Midlands have seized a foreign-owned gold mine and allowed party youths to mass onto the property in what is seen as a vote buying gimmick ahead of elections due this year.

Gaika gold mine is owned by Jersey-based and privately-owned Duration Gold which acquired a several mines in the country back in 2006 and kept them under care and maintenance due to inclement economic conditions at the time.

Seizure of the company’s Kwekwe property was reportedly facilitated Mbizo legislator Vongainaishe Mupereri and is understood to have the backing of senior Zanu PF officials from the province.

Youths aligned to the ruling party recently marched through central after being bussed into the city for the mine takeover.

Mupereri he has since insisted that the mine grab is a youth empowerment initiative, accusing Duration Gold of having “abandoned” the property two decades ago without any valid reason.

In a letter seen by this publication, the MP said he had taken the matter up after the Kwekwe community approached him them.

He had also written to the mines minister, provincial affairs minister and Kwekwe City Council “laying out concerns for the abandoned mine but to no avail from the company.

“… Your Company started operations in 1983,” Mupereri wrote to Duration Gold, adding that many people were displaced to “pave way for establishment of the entity with the pretext that it will create massive employment for the locals.”

According to the legislator, the mine closed shop in 1998 without any convincing reasons, and Duration Gold has since failed resume operations.

Mupereri’s move has however turned the mine site into a ticking health time bomb and crime centre, threatening the nearby Fitchlea suburb.

A community leader who declined to be named fearing victimisation said the illegal miners have taken to thievery and house break-ins.

“They are now breaking into people’s homes and the safety of the residents is now at stake,” he said.

“It is also disturbing to note that the place has become a ticking health time bomb with food vendors swarming the place which does not have any ablution facilities.

An insider has since said that operations at the mine are being controlled by “chefs”.

“There are powerful individuals who are behind this takeover. The main reason for the taking over of Gaika Mine is for it to be used as a campaigning tool for President Emmerson Mnangagwa,” the source said.

This however, is not the first time that Zanu PF has given gold panners free reign in the gold-rich city and its environs just before general elections.

Ahead of the 2013 vote, hundreds of panners were bused to Sherwood goldfields with senior Zanu PF officials reportedly getting 10percent of the revenue.