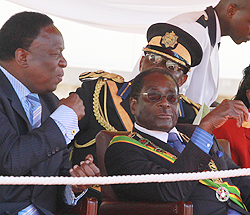 IN the aftermath of Zanu PF founder and former minister Enos Nkala’s death, debate has been raging about his role in Zimbabwe’s political history, particularly the liberation struggle, as well as his contribution to nation-building, and also repression in the mid-south-western regions immediately after Independence in 1980.
In a bid to shed more light on events during the dark era of state-sponsored killings in the Midlands and the South-West –– the Gukurahundi period, in which Nkala was actively involved despite his denials –– we publish an insightful piece by Kent State University’s Professor Timothy Scarnecchia, an expert on Zimbabwean and African history.
This article examines the role of diplomatic relations during the first stages of the 1983 Gukurahundi in Zimbabwe. Based on a preliminary reading of South African Department of Foreign Affairs files for 1983, the article suggests that Cold War relations between Zimbabwe and the United Kingdom helped to provide cover for the Zimbabwean National Army’s Fifth Brigade’s campaign of terror.
Similarly, American support for President Robert Mugabe’s claims to be a pro-Western leader committed to non-racialism helped provide international cover for the atrocities.
At the same time, evidence shows high-ranking Zanu PF officials negotiated with the South African Defence Forces in 1983 to cooperate in their efforts to keep Zapu from supporting South Africa’s ANC operations in Zimbabwe. The 5th Brigade’s campaign therefore served a purpose for apartheid South Africa, even as Zanu PF officials rationalised the Gukurahundi violence in international and anti-apartheid circles as a campaign against South African destabilisation.
The article suggests that the diplomatic history of the Gukurahundi can provide a useful lens for understanding the tragedy in both regional and international Cold War contexts.
In her popular book Dinner with Mugabe, Heidi Holland includes a quote from Mugabe where he accuses some factions in Zanu PF of “cutting deals with the British and Americans” after the 2005 elections.
Mugabe asks: “Since when have the British, the Americans, been friends with Zanu PF?” Mugabe’s often repeated claim that the United States and the United Kingdom are the enemies of Zanu PF and hence of Zimbabwe does not stand up well to historical scrutiny.Advertisement