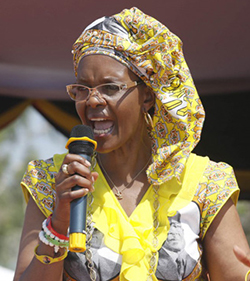 ZANU PF’s annual bootlicking shindig interestingly called People’s Conference has come and gone. The dust is settling and there is no doubt that some are now counting their heavy losses including a number of Victoria Falls hotels that will no doubt wait for months to get paid for their services, if at all they will receive a dime.
This whole episode, only for shameless men and women from across the ten provinces to fall over each other in endorsing Mugabe’s life presidency while being prepared for the supersonic elevation of his wife! Is it the same Mugabe who can’t tell the difference between a wedding speech and a eulogy that Zanu PF zealots want to have as presidential candidate in 2018?
For a few minutes, we watched the congress and were utterly dismayed because there is absolutely no way these gentlemen can ever create the Zimbabwe we imagine. They are not only old, tired and not retired, but even the language they use indicates people who are stuck in the past, oblivious to the reality that Zimbabwe is at its knees, not because of the lack of resources, but because they have clearly failed to unlock the potential our country has. One by one, like sheep, they all sang praises to Mugabe more out of fear of being purged than out of respect or principle.
We even took a closer look at Mugabe’s face and all we could see on it was the past and not the future. The President is old and tired and cannot represent the future we want. He has played his part; it is time for him to go home! It is now obvious that Mugabe is preparing to elevate his wife to some very senior position. His direct attack on war veterans opposed to G40 is, to all intents and purposes, a clear message that he is taking sides with his wife’s faction.
The dismissal of Joice Mujuru from Zanu PF for supposedly leading a faction or harbouring presidential ambitions sounds ironic now given that Grace Mugabe is undoubtedly the godmother of the G40 faction. It would appear that Robert Mugabe and his second wife are telling us that nobody in Zimbabwe is allowed to express presidential ambitions except his wife Grace. We are definitely seeing the Mugabe dynasty taking shape while Zanu PF members continue to cheer on.
We cannot forget that not long ago, securocrats openly told the nation that they would not salute anybody without liberation history which was a direct reference to Morgan Tsvangirai. Today, we challenge those same men to stand up and tell us which war Grace Mugabe fought in, even as a chimbwindo.Advertisement

Why are the “fearless” fighters conspicuously quiet when they are being labelled drunkards by Kasukuwere who was not even a teenager in 1980? Why do they keep quiet when Mugabe tells them that they must stop behaving as if they were the only ones who fought the war?
When Margaret Dongo, those many years back, called these men Mugabe’s wives, had she seen something well beyond her time? Where are the Tekeres of this world? Where are you Eddison Zvobgo, Lazarus Nzarayebani, Sydney Malunga? Byron Hove, can you hear us? You were the kind of men Zimbabwe needs at this juncture, men who put principles ahead of sycophancy.
Yes, the Victoria Falls get-together may have given Mugabe an unsurprising Christmas present, life presidency for Zanu PF but what did Zimbabwe get? What did ordinary people get except empty promises that will soon be forgotten after the dust has settled in the tourist town?
Mike Bimha, believed to be Grace’s close relative, even had the audacity to tell delegates that industries in Bulawayo had come to life again. Maybe he flew over some industrial hub in South Africa and thought it was Bulawayo. This is not without precedent; our most incompetent Minister of Agriculture, Joseph Made, once told us that we were heading for a bumper harvest after a helicopter joy ride that may have flown him over Zambia!
Come 2016, Zimbabwe’s dead economy will be on its path to accelerated decomposition. People will be much poorer, a lot of kids from ordinary families won’t be going back to school in January, a few remaining companies will close shop, more workers will join the swelling ranks of vendors; Mugabe’s nephew will chase away any remaining investors and Zimbabwe will be on its knees.
Unless we collectively challenge and confront Zanu PF’s madness aggressively, we may as well forget about any chance of economic revival in our lifetime. Zanu PF looters won’t take our nation anywhere.
Let 2016 be the year of decisive action – gore rezviitiko.
Vince Musewe is an independent economist based in Harare. Moses Chamboko is a pro-democracy activist and interim Secretary General for Zimbabweans United for Democracy (ZUNDE).