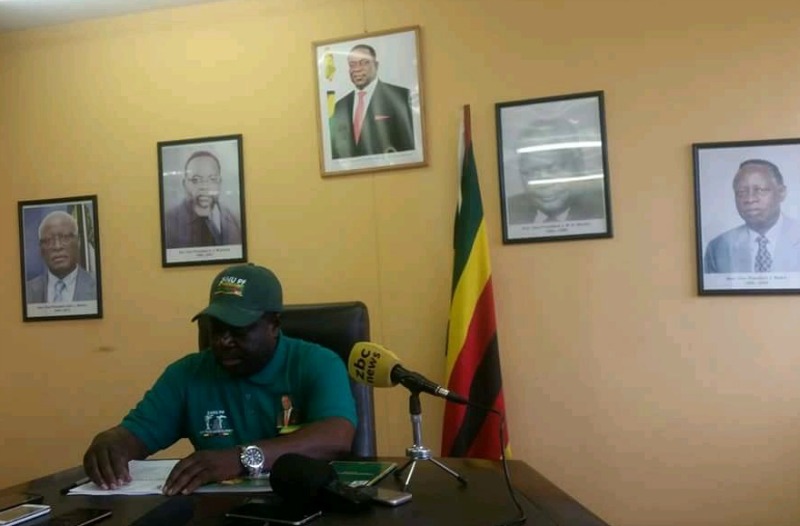 PRESIDENT Emmerson Mnangagwa’s avowed admiration for his predecessor, Robert Mugabe and his contributions towards the country’s liberation could be cosmetic after all, if the choice of portrait displays at a Zanu PF headquarters boardroom is anything to go by.

Entering the Zanu PF commissariat boardroom, one is greeted by portraits belonging to Mnangagwa and those of former Vice Presidents Joshua Nkomo, Simon Muzenda, Joseph Msika and John Nkomo.

Conspicuous by their absence are portraits of Mugabe and former Vice Presidents Joice Mujuru and Phelekezela Mphoko.

Mugabe was overthrown November last year in a military assisted intervention with accusations he was abusing his powers to protect “criminals” around him while also failing to restrain his wife, Grace and her allies from usurping his presidential powers.

Mphoko also suffered collateral damage when Mugabe was removed from office, having been among those who supported Mugabe’s bid to elevate his wife to the position of VP.

Mujuru, on her part, was forced out of the party in 2014 by Mugabe who accused her of fronting an elaborate plot to remove him as President.

Even during her tenure as Zanu PF’s number two, Mujuru was always involved in a fierce tussle for party control with Mnangagwa ahead of what was Mugabe’s much anticipated exit by whatever means.

There were strong suspicions Mugabe’s decision to get rid of Mujuru, coupled with the immediate elevation of Mnangagwa to her place was all to do with the ex-leader’s attempts to pass on the baton to the now Zimbabwean leader.

The absence of the three’s portraits at an important Zanu PF boardroom could betray the new leader’s feelings about his former allies turned rivals.

NewZimbabwe.com could not readily verify if this was the case with some of the boardrooms and offices at Zanu PF headquarters.

Setfree Mafukidze, a former Zanu PF youth activist and now a Mujuru ally, said in a tweet this week that that was an attempt by the Mnangagwa administration to “distort” history.

“President Mugabe’s portrait does not make it among the portraits of current and past Presidents & Vice Presidents at Zanu PF Offices, even Former Vice President Joice Mujuru is not there, this is how history is easily distorted, Zanu PF cannot run away from Mugabe, he is a founder,” he said.

Speaking on condition of anonymity, a Zanu PF employee based at the party’s main headquarters said the suspicious choices of portraits had nothing to do with attempts by the current leader to obliterate Mugabe’s history.

He said the design was appropriate as it was meant for former VPs who were now deceased.

Reached for comment, party secretary for administration Obert Mpofu professed ignorance over the matter, adding that the new Mnangagwa leadership harboured no ill feelings towards its former leaders.

“I don’t know which boardroom you are talking about but there cannot be any reasons of removing them,” Mpofu said.

While Mnangagwa continues to claim Mugabe was a liberation icon, the former President and his allies have continued to allege the veteran politician was being ill-treated.

Exiled former cabinet minister and Mugabe’s most vocal ally, Jonathan Moyo has often accused Mnangagwa of faking his love for his former boss and yet continues to humiliate him.