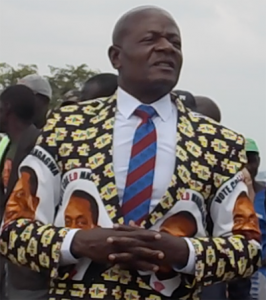 Garwe boasted that the ruling party controls the country’s courts, the military and the police.

His remarks come at a time the CCC members, including legislators, are frequently attacked by suspected Zanu PF activists across the country.

Addressing party supporters in Seke on Tuesday, Garwe said any provocation by the opposition would be dealt with accordingly.

The minister also told his supporters to shun violence at any cost, but insisted they should retaliate if provoked.

A CCC activist was abducted by Zanu PF activists before being gruesomely murdered and thrown into a well in Beatrice, sparking conflicts between the ruling party and the main opposition.

Opposition supporters were arrested for destroying homes belonging to Zanu PF supporters and CCC members also accused Zanu PF members of destroying their homes, but no one from the ruling party was arrested over the attacks.

A total 16 activists including two lawmakers of CCC are still in jail over the alleged violence.

“Zanu PF supporters in Seke community are re-building Nyatsime structures that were destroyed by CCC members. We appreciate the good gesture from the youths, but such violent clashes should never happen again in our communities,” added Garwe.