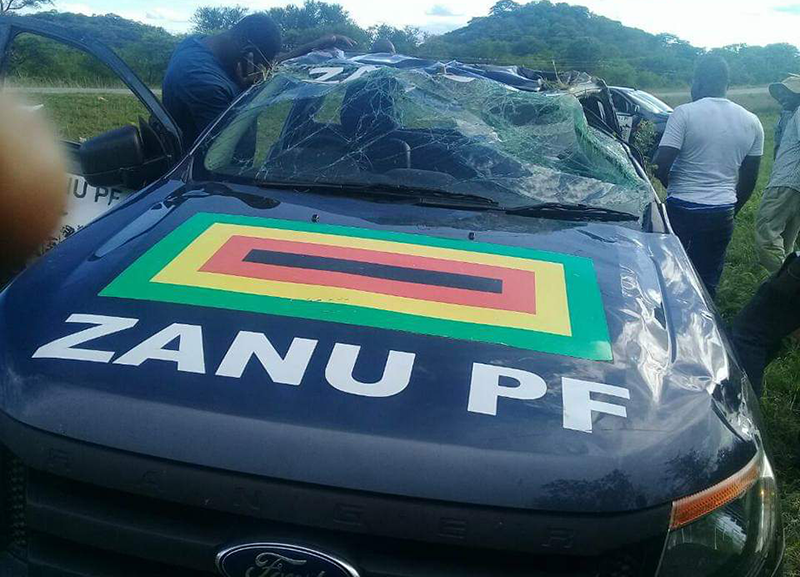 ZANU PF Matebeleland North youth provincial chairperson, Lundy Sinzeka (33) was on Christmas day seriously injured  when a party vehicle which he was driving overturned along the Binga-Cross Dete road.

The accident also claimed one life while four other passengers were critically injured.

According to police, Sinzeka lost control of the vehicle after failing to negotiate a curve near Manjolo business centre along the Binga-Cross Dete road.

“On 25 December at 10 am and at the  115 km peg along Cross Dete-Binga road, Sinzeka was driving a Zanu PF Ford Ranger twin cab travelling from Binga to Mangobole with five passengers, his wife and relatives on board”

“Upon approaching the 115 km peg, the driver failed to negotiate a curve, lost control of the vehicle which veered off the road to the left and right, overturned and rolled several times  before landing on the right side,” said the police.

One passenger died on the spot while the four sustained serious injuries.

Sinzeka and his other three relatives are admitted at Binga district hospital while two others were transferred to Mpilo Hospital in Bulawayo due to the seriousness of the injuries.

It is suspected that Sinzeka was speeding when the accident occurred.