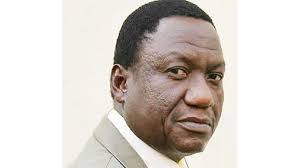 AS the political temperatures reach the boiling point ahead of impending Zanu PF provincial elections in Mashonaland West, party youths at the weekend staged a demonstration against Information deputy minister Kindness Paradza who is eyeing the provincial chairmanship in Chinhoyi.

The youths are believed to have been hired from Chegutu and Mhangura by Paradza’s nemesis, Vengai Musengi.

They accused Paradza of snubbing a meeting to resolve an election dispute in Mhangura.

The demonstrators arrived at the PCC meeting venue, Chinhoyi University of Technology (CUT), aboard a Blue Circle bus while others drove in vehicles singing and blowing horns.

They waved placards inscribed “Down With Paradza” and “We are tired” in full view of anti-riot police officers who took no action.

In the heat of the chaos, Zvimba South legislator Phillip Chiyangwa, who was just beginning to address the meeting, ordered the party’s security department to stop the commotion, but they could not be deterred.

Chiyangwa bellowed: “Security, please check what is happening, we don’t want to be attacked from behind. I have never encountered such indiscipline within the party.”

Paradza was escorted to his vehicle by state security agents and party security officials.

He said he was not moved by legionnaires hired by his rivals, who were afraid of losing in the upcoming provincial plebiscites.

“My detractors are running scared and are now using dirty tricks to soil my name. The district elections were held and are now behind us, and all those raising dubious appeals are merely out to attract unnecessary attention,” he said.

Guest of honour at the meeting, politburo member, Christopher Mutsvangwa described the incident as unfortunate and said perpetrators must be punished.

“It is an unfortunate incident which l have requested the resident minister (Mary Mliswa-Chikoka) to sort out. It is something which we don’t tolerate as a party,” Mutsvangwa said.

Ironically, Mliswa-Chikoka herself reportedly faces a backlash from voters in Kadoma for employing machete gangs to intimidate supporters of her rivals.

During her recent whirlwind tour of Kadoma district to drum up support, Mliswa-Chikoka allegedly hired Tsitsi Mutariswa and one Enia, who is married to one George ‘Mbimbo’ Chikwaturo, to instil fear in would-be voters to rally behind her candidature.

Paradza, Mliswa-Chikoka and Musengi are expected to square off in the race for provincial chairman post in polls whose dates are yet to be set.