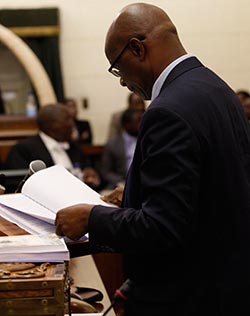 IF Zanu PF was a car on the road and blatant lies were the fuel, the gauge would be flashing orange by now, if not red; a clear sign that there is not long to go before the tank runs empty. And supposing 2018 was the nearest service station, an embarrassing breakdown in the middle of the potholed road with unmarked lanes would be inevitable. What a pitiful way to start the 2014 journey!
It all started with insipid and perfidious election promises where President Robert Mugabe and his party had the fewest star rallies in three decades all of which were decorated with lies and deception. Zimbabweans have not forgotten that more than a million jobs were promised at the rallies. As we speak, more jobs have actually been lost than created since the ominous July 31st elections.
Those who are very lucky to be back at work this year will have no option but to banish “payday” from their vocabulary. The first edition of Nikuv dictionary defines payday as “not the day when employees are to be remunerated for their hard work but the day when employers may pay employees some portion of their wages. In the process, getting nothing is pretty normal”. Sovereignty indeed!
There were also promises of farming inputs irrespective of political affiliation. Any survey would determine that very few benefited under the scheme; and those who did are either well-connected to “chefs” or known Zanu PF activists. This is yet another falsehood of the rainy season! As usual, the Zimbabwe Diaspora did what they always do which is send money back home to buy seed and other inputs otherwise several families would just sing “mvura naya tidye makabvu” with no sign of mana falling from heaven. However, such benevolence won’t be eternal, unless something gives. We are not an ATM!
Another great deception was that diamonds have been exhausted at Marange fields. This announcement came not long after Zimbabwe was cleared to sell her gems on the free market. Undoubtedly, beneficiaries of looting saw formalisation of diamond trade as a threat to their illicit fortunes so they came up with a pretext. At some point, former ZMDC boss, Goodwills Masimirembwa, was nearly sacrificed until the obedient son probably made the all-important phone call explaining that “Shefu, imwe yacho ndiyo iya yaiva mubriefcase”.  Those who used to talk sanctions at every turn no longer have the energy, courage nor confidence to do so anymore. The emperor is very naked! If diamond deposits believed to be a quarter of the world supply could run out so quickly, Botswana would have literally crumbled many years ago. Zimbabweans aren’t fools!Advertisement

Paradoxically, Parick Chinamasa has started singing a familiar song from the “Wanachi” hymn book, “there is no money”. Is he the same man who was literally frothing at the mouth not long ago misleading the nation that the government had tonnes of money but Treasury was refusing to release it? With unfettered access to the stockpiles of hard currency, why is Chinamasa looking as far afield as the Diaspora for budgetary support? Diaspora vote and clarity of dual citizenship come first before anything else. Before he starts feeling very important after delivering a US$4.2 billion budget, may somebody remind Mr Chinamasa that an ordinary Australian bank makes a half-year net profit in that range if not much more. It demonstrates how poor we have become under this incompetent regime.
During the GNU’s tenure, Zanu PF vehemently denied that government had any ghost workers. Yet with very little effort, more than 400 ghosts were uncovered at ZBC alone. This is a microcosm of decades of corporate malfeasance which reduced one of Africa’s best airlines to a no-fly zone when management dropped “Experience our Excellence” in favour of “Experience His Excellency”. If you stopped at a railway crossing these days, people would think you were very drunk or just arrived from the Diaspora; trains have stopped moving while top NRZ managers enjoy hefty perks.
With Welshman Ncube out of the way, why aren’t we seeing black smoke polluting the skies of KweKwe and Redcliffe to prove that Essar is seriously in business? Where is the multi-million dollar pledge to recapitalise and revive Bulawayo industries? When are we going to see the first drop of water from the Matabeleland-Zambezi pipeline? In 2014, Zimbabweans must simply burn or bury ZANU PF’s depleted bag of lies and start rebuilding their lives. Time to end this lunacy is now.
Moses Chamboko is the Interim Secretary General for Zimbabweans United for Democracy (ZUNDE). Contact us at info@zunde.org or visit www.zunde.org