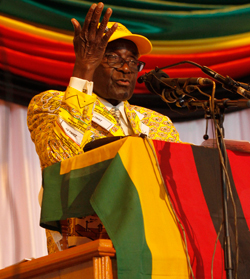 MORGAN Tsvangirai is often dismissed as a witless Western puppet. He is. There is much talk of his shameless philandering and how this is unbecoming of a man aspiring for public office. All this is true. Others point to his lack of intelligence and notorious policy flip-flopping. Again, this much is also true.
It is beyond argument that Tsvangirai is inadequate and would not qualify to serve even as a mere MP in the very countries that dishonestly flatter him as being as great as Mandela.
The problem with attacking Tsvangirai’s inadequacy is that it inadvertently exposes the inadequacy of Zanu PF. The key question is how a man as hopelessly inadequate as Tsvangirai managed to take control of Parliament in 2008? How has a man as inadequate as Tsvangirai taken control of so many local authorities across the country? How did Tsvangirai managed to outpace Robert Mugabe in the first round of voting in March 2008?
These are uncomfortable questions for Zanu PF but they must be asked. It is similar to a man who returns home to find a baboon washing its hands readying to eat dinner and declaring to be the new head of the house, this not through coercion. How great the pain when the father hears his youngest child happily calling the baboon ‘daddy’?
The question the father must ask himself is why his family has accepted the affections of a baboon. In the same way, it is important that Zanu PF begin an honest introspection as to why millions of Zimbabweans now support a puppet political party led by a man who is barely qualified to manage a grocery store.

This process of introspection is a painful one but it is essential if Zanu PF is to survive as a political organisation. The MDC-T does not present an existential threat to Zanu PF. At one time it did, but that seems increasingly less so. All indications are that Zanu PF will defeat the MDC at the presidential level.
The real threat to Zanu PF lies in the post-Mugabe, post-Tsvangirai era. The Robert Mugabe brand remains popular and the party has ridden that wave for the past three decades. The real question is who, apart from Mugabe, has the capacity to hold a star rally and excite 30,000 people into attendance? Few can make such boasts. Zanu PF must prepare for a future without the star power of Robert Mugabe.Advertisement

Let’s come back to Morgan Tsvangirai. Despite his many flaws, the man has managed to mount a considerable offensive.
Let us imagine for a moment that a replacement steps onto the opposition scene in the coming years. Our imaginary opposition leader is not pro-West. He is a radical nationalist and routinely slams Western interference in African affairs. Our fictitious man is as clean as a whistle as regards corruption, well spoken and generally well respected.
His Facebook and Twitter pages have just over a million followers each. He is a disciplined man and appeals to the nationalist spirit. He argues that Zimbabwe is a great country but is held back by corruption and inefficient government.
How would Zanu PF respond to an intelligent opposition figure with nationalist credentials? What card would Zanu PF play to draw supporters away from the man?
The 8% lingers on
The eight percent of voters who voted for Simba Makoni in 2008 would most likely vote for our imaginary politician. That eight percent vote represents a key constituency in Zimbabwean politics.
We can now safely say that a significant eight percent of Zimbabwean voters are independent voters. That same percentage can be seen in the constitutional referendum where six percent of voters rejected the cajoling by all major parties and voted no.
However you look at it, the fact is there is a growing number of voters who pledge no allegiance to any major political party. This group of voters is going to become increasingly powerful in Zimbabwe. You cannot ignore a 10 percent block especially in view of ZAPU and the Welshman Ncube-led MDC strengthening in Matabeleland.
The people who supported the baboon out of frustration with Zanu PF represent the core opposition. Their support of Tsvangirai is not ideological. It is merely incidental that Tsvangirai appeared on the scene at a time of growing disaffection.
It is in this context that the future of Zimbabwean politics must be viewed. There is a core opposition to Zanu PF that incidentally fell into the arms of Morgan Tsvangirai. Once Tsvangirai is removed from the political stage, this core opposition will not immediately rush back to Zanu PF. Such an assumption would be absurd.
Tsvangirai was a weak opponent. The question is how will Zanu PF answer a man who supports land reform? A man who is a respectable family man? How would Zanu PF defend itself when our imaginary politician asks young voters how many of them had been forced to pay a bribe at the VID? How would Zanu PF defend itself when our imaginary politician mocks the inefficiency at the passport office and explains, quite rightly, that it will take him no more than three weeks to bring an end to the endless queues? How would Zanu PF defend itself when our opposition leader laughs at the fact that we only have one broadcaster in the country and that he would immediately issue five licenses if appointed to office?
Would any young Zimbabwean voter be opposed to a politician who promises them more television channels, explaining that all it takes is the stroke of his pen once he gets into office? Would voters not be elated if a politician cracked the whip against the petty criminals at the VID? Why would voters not support an opposition leader who attacks police corruption and bribery at roadblocks and promises to trap and arrest corrupt officers? These are unobjectionable universal values that would resonate with millions.
The greatest indictment against Zanu PF would be the fact that all this costs no money, merely political will.
The real threat to Zanu PF is not the MDC-T. Tsvangirai will be defeated and likely overthrown from the presidency of the MDC. The donor funds that the MDC-T relied on in past times will dry up. Zanu PF will rule, at the very least, for the next decade. It is during this time that a credible opposition could arise. Mugabe won’t be around to hold the floodgates in place.
Amai Jukwa is a loving mother of three. She respects Robert Mugabe, is amused by Tsvangirai and feels sorry for Mutambara